Weekly Anticipation Index: 'Get Him to the Greek,' 'Marmaduke' and 'Killers'

Get Him to the Greek, Marmaduke and Killers will try to do damage at the box office in June.

This week, we've added Marmaduke, Get Him to the Greek and Killers to our Anticipation Index. All three films are set to hit theaters on June 4. 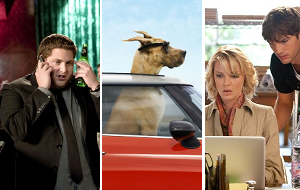 Owen Wilson starred opposite a dog in Marley & Me, and now he provides the voice of one in Marmaduke, a film that should be just as successful. Even though young children won't be familiar with the comic strip source material, this 20th Century Fox release will be a no-brainer for family audiences. Just don't expect it to post numbers anywhere near what the two Alvin and the Chipmunks movies have done for the studio.

Get Him to the Greek director Nicholas Stoller took Jason Segel, an unlikely leading man if there ever was one, and helped him achieve box office success in 2008's Forgetting Sarah Marshall. With his latest flick, Stoller will have to accomplish the same thing. Neither Jonah Hill nor Russell Brand qualifies as "typical," and they are certainly not the kind of actors that studios build summer blockbusters around. Yet this rock-and-roll version of My Favorite Year has a hilarious theatrical trailer (the red-band version is even better) that should propel it to a successful debut.

The success of Killers depends on whether or not audiences feel that stars Katherine Heigl and Ashton Kutcher have chemistry together. The Lionsgate release should find a niche among moviegoers who aren't interested in the adventures of Marmaduke or the crude humor of Get Him to the Greek.

Check out our predictions for Marmaduke, Get Him to the Greek and Killers as well as other films in the table below.