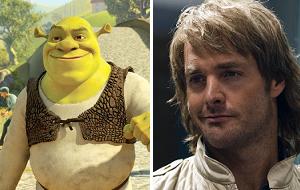 Wednesday Afternoon Update: Everyone's favorite green ogre and a bumbling special operative will try to make a mark at the box office this weekend. Meanwhile, Tony Stark's run at #1 will definitely come to an end.

Shrek Forever After is poised to easily claim the top spot at the box office, which means that the Paramount/DreamWorks Animation duo will have two films in the top ten this coming weekend since How to Train Your Dragon is still hanging around.

Even though 2007's Shrek the Third was met with an unenthusiastic reception, there's still plenty of goodwill in the franchise left to capitalize on. The third installment opened to a whopping $121.6 million, and it ended its domestic run with $322.7 million. Even if some fans drop off, or don't show up during opening weekend, there will still be plenty left over to give the latest ogre flick a healthy debut.

The fact that Shrek Forever After is in 3D will also help cushion the blow that may come from a decrease in the franchise's fan base.

As of 2 p.m. PT, Fandango.com is reporting that Shrek Forever After is responsible for a solid 12 percent of daily sales. That's not bad considering that the rush to get tickets for The Twilight Saga: Eclipse is well underway.

The animated flick's presence on Twitter and Facebook isn't anything extraordinary, and it's not generating an overwhelming amount of activity on Flixster.

"Searches for Shrek were up significantly this week, but overall traffic showed only mild growth. That could mean that interest hasn't grown substantially beyond those who showed early enthusiasm," says Flixster spokesperson John Singh.

Expect Shrek Forever After to grab $96 million from 3,800 locations during its debut frame.

Iron Man 2 will end up in second place this weekend after spending two weeks at #1. While the superhero flick fell shy of topping The Dark Knight's opening weekend haul, it's far from a disappointment. The sequel should easily match its predecessor's $318 million domestic haul.

As of 2 p.m. PT, Fandango.com is reporting that Iron Man 2 is responsible for six percent of daily sales.

Look for Iron Man 2 to add another $27 million to its impressive haul.

Robin Hood should fall quite a bit during its sophomore frame. The period pic just isn't suited to what American audiences are looking for during the summer movie season. The Universal release scored an underwhelming B- from CinemaScore and it has a 66 percent approval rating on Flixster, which pales in comparison to Iron Man 2's 81 percent.

As of 2 p.m. PT, Fandango.com is reporting that Robin Hood is responsible for four percent of daily sales.

Expect Robin Hood to tack on another $17 million this weekend.

While Universal has given MacGruber an aggressive marketing campaign, the Will Forte vehicle will still be overshadowed by Shrek Forever After, Iron Man 2 and Robin Hood. The Saturday Night Live spinoff is going to have to settle for leftovers. However, if audiences respond well it could become something of a sleeper hit over the next couple of weeks.

"Macgruber's only real support is coming from under-25 males. Other demographic groups aren't showing a strong desire to see it," says Singh when discussing activity on Flixster.

MacGruber should grab $11 million from 2,400 locations during its opening weekend.