Long Range Forecast: 'Dinner for Schmucks' and 'Ramona and Beezus'

Salt, Dinner for Schmucks and Ramona and Beezus enter the summer frame this July 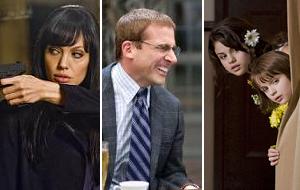 This week, we've added Salt, Dinner for Schmucks and Ramona and Beezus to the Long Range Forecast. All three films are set to hit theaters on July 23.

Salt star Angelina Jolie certainly doesn't suffer from a shortage of publicity, and Sony will look to capitalize on her fame to help give this spy thriller a healthy opening. Of course, there's always the risk that moviegoers will feel they see enough of Jolie in the press and ultimately avoid the flick due to that overexposure.

Salt will look to grab the same audience that showed up to watch Jolie kick ass in Wanted. That action flick opened to an impressive $50.9 million in June '08.

Steve Carell is having quite a year. Date Night will reach the $90 million domestic plateau this weekend, and Despicable Me has a lot of potential. As long as audiences don't feel as though they've seen too much of Carell by the time Dinner for Schmucks rolls around, then the Paramount release should end up becoming a solid comedic hit. It obviously doesn't hurt that Jay Roach (the Austin Powers films) is behind the lens. Roach is easily one of the most reliable comedic directors working today.

Ramona and Beezus will represent a nice alternative for younger female viewers, and its performance will determine whether or not young star Selena Gomez has a future in films.

Check out our predictions for those three films as well as others in the table below.