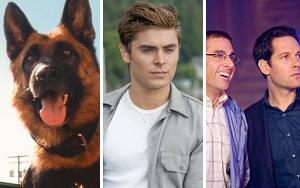 Wednesday Update: While Dinner for Schmucks, Charlie St. Cloud and Cats & Dogs: The Revenge of Kitty Galore all have their strengths, Inception is likely to stay #1 for the third weekend in a row.

The buzz surrounding Inception is still quite strong. The Warner Bros. release has become one of the biggest must-see event movies of the summer, ranking up there with Iron Man 2, The Twilight Saga: Eclipse and Toy Story 3. It looks as though the mind-bender has a decent shot at hitting $300 million domestically.

According to the most recent WebWatch report, Inception still boasts a dominant 23.07% market share of online opinions among unreleased films. Salt ranks far behind with 10.14%. Inception lends itself well to multiple interpretations and that's why online conversations are still raging.

On Facebook, Inception is still adding thousands of fans a day and it's poised to hit at least 700,000 by Friday. That's a very impressive number for a film that's not part of an established franchise.

As of 3 p.m. PT, Fandango.com is reporting that Inception leads daily sales with a staggering 44 percent.

Look for Inception to rake in $29 million during its third weekend in theaters.

Salt should hold enough of its audience to finish in second place during its sophomore frame. Reactions to the spy thriller are generally healthy considering that it currently boasts a 77% approval rating from nearly 40,000 user reviews on Flixster.

As of 3 p.m. PT, Fandango reports that the Angelina Jolie vehicle is responsible for 15 percent of daily sales.

Of all the new wide releases, Dinner for Schmucks looks the strongest. Stars Paul Rudd, Steve Carell and Zach Galifianakis are at the top of their games right now. Plus, it doesn't hurt that Schmucks is coming on the heels of two serious action flicks. Moviegoers will be in the mood to laugh after debating dream worlds and tracking spy betrayals.

Schmucks has delivered a surge in activity on Facebook and Twitter this week. From Tuesday morning to Wednesday morning the comedy's most active page tacked on 15,138 new fans, and it should easily have 100,000 by the end of the week. To put that into perspective, Grown Ups had around 140,000 fans on the day of its release. Schmucks is also inspiring a comparable number of tweets to Grown Ups and Couples Retreat.

Fandango says Schmucks is responsible for a relatively weak 2% of daily sales. Look for that number to increase slightly tomorrow.

"Schmucks is doing best with the over-25 set, skewing more heavily male, but it's looking like the star of Date Night has delivered another pretty strong date-night option," says Flixster spokesperson John Singh when discussing activity on the popular website.

Dinner for Schmucks should bring in $22.5 million from 2,500 locations during its debut frame.

Charlie St. Cloud will have a strong appeal among teenage girls thanks to the drawing power of Zac Efron. The tearjerker plot may also rope in a fair amount of adult females as well, but don't expect the film to do well among males. While moviegoers usually look for escapist fun during the summer, there's still room for a somber flick to make a dent. My Sister's Keeper opened against Transformers: Revenge of the Fallen last summer, but it was still able to debut to $12.4 million before raking in a respectable $49 million domestic haul.

With more than 630,000 fans on Facebook, Charlie St. Cloud has built a healthy base. That's three times as much as Letters to Juliet had in the days leading up to its release in May. On Twitter, the tearjerker is registering healthy tweet volumes compared to the likes of Dear John, The Last Song and Remember Me.

Fandango reports that Charlie St. Cloud leads all newcomers on Wednesday with 5% of sales.

Cats & Dogs: The Revenge of Kitty Galore lacks a real pulse online. On Twitter, the Warner Bros. is pacing behind Marmaduke, but C&D2 has more fans on Facebook than Fox's June flop did. The 3D element and a strong location count of around 3,700 will help boost what could have been an extremely underwhelming debut.

Look for Cats & Dogs: The Revenge of Kitty Galore to start its run with $15.5 million.