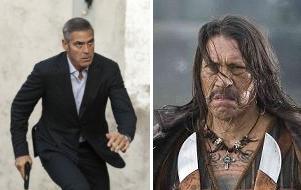 The American finds George Clooney taking on the role of a hitman on one final job. Clooney's more risky films tend to find reliable followings, but they rarely turn into blockbusters. The Men Who Stare at Goats, Leatherheads and Good Night, and Good Luck. all landed in the vicinity of $30 million domestically, while Syriana and Michael Clayton ended up in the $50 million range. Expect The American to end up somewhere in between.

Machete marks a major starring role for character actor Danny Trejo, and he's being backed up by an incredible supporting cast that includes Robert De Niro, Jessica Alba and Michelle Rodriquez. The film is a spin-off of a trailer that appeared in Grindhouse, the Quentin Tarantino/Robert Rodriquez collaboration, and it will appeal to fans of campy action flicks.

Check out our predictions for both films as well as others in the table below.