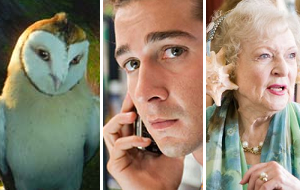 This week, we've added three news films to the Long Range Forecast. Legend of the Guardians: Owls of Ga'Hoole, Wall Street: Money Never Sleeps and You Again are all set to open on September 24.

With Legend of the Guardians, Warner Bros. enters the 3D animation arena. Universal just proved with Despicable Me that even though Disney/Pixar and DreamWorks Animation dominate the space, there's still plenty of money to be made. The big question, as basic as it sounds, is whether or not moviegoers will find owls as cute as other animals that have lead to successful franchises. If children aren't enthused about owls, they won't want to buy any products based on the film and Warner Bros. will be unable to build a new franchise. The Happy Feet property is heading for 3D, so WB will at least have that to rely on if Ga'Hoole doesn't take off.

The success of Wall Street: Money Never Sleeps depends on whether or not moviegoers really want to pay to grapple with the tough economic issues that are already on the news every day. The star power of Shia LaBeouf and Michael Douglas should help to make the medicine go down a little easier in the same way that George Clooney was able to get people to show up for Up in the Air. Plus, there will be a loyal base of people who admire 1987's Wall Street.

You Again will try to tap into the recent Betty White craze. As long as there's still momentum there, the Disney release should be a modest success among female moviegoers.