Long Range Forecast: 'The Social Network' and 'Let Me In'

A story about the creation of Facebook and another vampire tale will try to start October off on the right note. 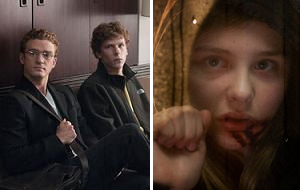 This week, we've added two new films to the Long Range Forecast. The Social Network and Let Me In are both set to open on October 1.

Sony is wasting no time pushing The Social Network. The studio has already released two teasers and a theatrical trailer and all three have been well received. Yet even though millions of teenagers around the world use Facebook, David Fincher's film comes across a serious drama that will appeal mostly to adults. The presence of Justin Timberlake may bring in some younger moviegoers, but expect this true story to skew older.

Let Me In is a remake of Let the Right One In, a Swedish vampire flick that certainly has a cult following in North America. The film's theatrical trailer is certainly well put together and it will appeal to horror/suspense fans. At this point, Twilight and Tru Blood have tapped into the vampire craze in a major way. Hopefully the market hasn't dried up by the time Let Me In opens.

Check out our predictions for these films as well others in the table below.

Tags: The Social Network, Let Me In