Three new films will aim for the #1 spot 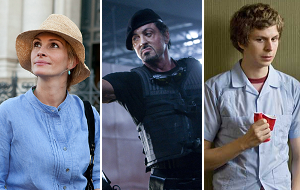 Check out our final predictions in the table below.

Wednesday Update: A crew of action stars are poised to fend off Julia Roberts and Michael Cera at the box office this weekend.

The Expendables has emerged as the frontrunner during what's shaping up to be a competitive weekend. Sylvester Stallone's nostalgic action flick has obviously struck a nerve and reached a high awareness level thanks in large part to an aggressive, innovative marketing campaign.

According to the most recent WebWatch report, The Expendables boasts an 11.23% market share of online opinions among unreleased films. That puts it behind only Vampires Suck and Scott Pilgrim.

Facebook growth for Stallone's action extravaganza has been healthy all week. Its fan count of more than 266,000 dwarfs the 60,000 fans that A-Team was able to collect by the day of its release.

On Twitter, Expendables has been outpacing Robin Hood by a healthy margin. Robin Hood appealed to the same male demographics that Expendables will also need to tap into in order to become a hit.

As of 3 p.m. PT, Fandango.com is reporting that Expendables is responsible for 10% of daily sales. Robin Hood tallied 12% on the Wednesday before its release, while A-Team delivered only 3%.

Look for The Expendables to grab $30.5 million from 3,270 locations during its opening frame.

Eat Pray Love will provide relief for female moviegoers who are tired of a summer full of explosions, fight scenes and car chases. The adaptation of Elizabeth Gilbert's wildly popular book will try to strike a chord in the same way that Julie & Julia did last August. That film was also released by Sony/Columbia and it opened to $20 million before raking in a healthy $94 million domestically.

While Julia Roberts is certainly not the massive draw she once was, EPL is a natural fit for her. Combine that with the fact that ads for the film have capitalized on writer/director Ryan Murphy's involvement in Fox's Glee, and you have two good reasons for moviegoers to trust the product that's being put in front of them.

EPL ranks in fifth place in the most recent WebWatch report with a 9.60% market share of online opinions among unreleased films. However, that's not something to worry about. EPL will skew older and much like It's Complicated it's not the type of movie that inspires large amounts of online conversations.

With nearly 580,000 fans, EPL has built a strong following on Facebook. While that's a far cry from Sex and the City 2's 1.75 million fan count on the Wednesday before release, it does compare favorably to Letters to Juliet's 224,000.

Twitter activity for EPL has also been solid. The Julia Roberts vehicle has been delivering comparable tweet volumes to the likes of Dear John, Remember Me and The Last Song.

As of 3 p.m. PT, Fandango is reporting that EPL is responsible for 28% percent of daily sales, which puts it comfortably in first place.

Eat Pray Love should bring in $28 million from 2,800 locations during its opening weekend.

Scott Pilgrim has built quite a following online, but unfortunately it will mostly appeal to a relatively narrow audience of teenage males. As a result, the Universal release will almost certainly finish behind Expendables and EPL.

Much like Kick-Ass, Pilgrim is shaping up to be the kind of movie that generates a ton of online buzz without becoming a huge hit. Pilgrim ranks #1 among unreleased films with a 21.89% market share of opinions. With more than 305,000 fans on Facebook it has a comfortable lead over The Expendables. On Twitter it is easily outpacing the likes of Kick-Ass and Prince of Persia: The Sands of Time. Even with all that support, Pilgrim won't come close to having a healthy presence in all four quadrants.

Pilgrim represents 8% of daily sales on Fandango as of 3 p.m. PT.

Expect Scott Pilgrim vs. the World to rake in $17 million from 2,600 locations.

After a strong debut, The Other Guys will take a considerable hit from the rush of new releases. A drop off of close to 50% is likely, which will put the comedy at around $18.5 million during it sophomore frame.