Five new wide releases will struggle to snag a #1 finish 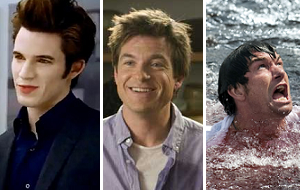 Thursday Update: As of 3 p.m. PT, Fandango.com is reporting that Eat Pray Love leads daily sales with 20%. Vampires Suck is not far behind in second with 17%. The Expendables is in third with 8%.

Wednesday Update: Vampires Suck, a spoof of the wildly popular Twilight franchise, has emerged as the favorite to finish ahead of the competition during a very crowded weekend.

After stumbling a bit at the box office with Disaster Movie, the writing/directing team of Jason Friedberg and Aaron Seltzer have found a prime target in The Twilight Saga. The 20th Century Fox release should easily draw in a healthy share of Twihards as well as bitter boyfriends who were forced to see the films against their will.

Teenagers will make up the bulk of Vampires Suck's audience, and it's obvious from activity on Facebook and Twitter that interest in the film is palpable. With well over 750,000 fans on Facebook, the comedy is doing an excellent job of mobilizing its fan base. To put that into perspective, Charlie St. Cloud had around 700,000 fans on the day of its release. On Twitter, Vampires Suck has been delivering comparable tweet totals to Step Up 3D while outpacing Charlie St. Cloud.

As of 3 p.m. PT, Fandango.com is reporting that Vampires Suck is responsible for 32% of daily sales. That number may drop off slightly on Thursday as moviegoers start to consider the other four releases.

Fox has sent the spoof out to 2,978 locations, which is the highest count of any new release this weekend. Boasting more theaters will serve as a major advantage during such a competitive frame.

Look for Vampires Suck to rake in $23.5 million from Wednesday to Sunday, $17.5 million of which should come during the weekend.

Piranha 3D will try to lure in moviegoers with the promise of campy thrills in 3D. It also doesn't hurt that the film's ensemble cast is full of recognizable faces such as Jerry O'Connell, Richard Dreyfuss, Ving Rhames and Elizabeth Shue.

According to the most recent WebWatch report, Piranha 3D holds a respectable 8.15% share of opinions among unreleased films. Conversations were likely stirred online thanks to the film's tongue-in-cheek "For Your Consideration" ad.

Unfortunately, Facebook support for Piranha 3D is almost non-existent. The film's most active page has yet to hit 5,000 fans, and most successful releases add that many new fans in a single day. Twitter activity is slightly more reassuring since the campy flick is at least outpacing Splice.

Piranha 3D has yet to crack into the top five sellers list on Fandango, but that could change tomorrow.

Expect Piranha 3D to rake in $11 million from 2,500 locations during its debut frame.

Lottery Ticket also lacks momentum on Facebook. For a film aimed at least partially at teens, 15,000 fans is a very low number. Vampires Suck added more than that on Tuesday alone. Luckily, the Warner Bros. release is generating a healthy amount of tweets, and it's outpacing the likes of Death at a Funeral and Just Wright.

Lottery Ticket has not cracked the top five on Fandango.

Look for Lottery Ticket to bring in $10.8 million from 1,973 locations during its debut frame.

Nanny McPhee Returns and The Switch will appeal mostly to females moviegoers. McPhee will make for a great mother/daughter trip to the movies, while The Switch should appeal to twentysomethings and beyond. Unfortunately, both films will have to compete with Eat Pray Love, which should display a solid hold during its sophomore frame.

McPhee has a healthy Facebook fan count of more than 90,000 and its daily growth has been in the thousands. The Switch's fan count of nearly 46,000 doesn't compare favorably to Letters to Juliet (200,000+ on the Wednesday before release) or Killers (87,000).

On Twitter, McPhee has been outpacing Marmaduke and The Spy Next Door. The Switch is at least ahead of Love Happens, an underperforming Jennifer Aniston vehicle from Fall '09.

McPhee and The Switch failed to rank among Fandango's daily top five.

Nanny McPhee Returns seems poised for a $10.5 million debut, while The Switch is looking like a dud at $6.5 million.