Resident Evil: Afterlife has the benefit of being the only new wide release 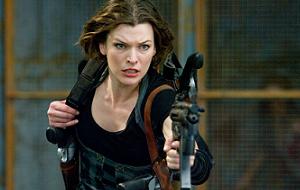 The fourth film in the Resident Evil franchise holds the distinction of always being intended as a 3D release, which means it's not another lackluster conversion job. Moviegoers are bound to notice. Plus, it also helps that Afterlife is gunning for an audience--mainly 18-34 males--that isn't dependent on their parents for money to go to the movies. That dependence is part of the reason why the likes of Cats & Dogs: Revenge of Kitty Galore and Step Up 3D failed.

According to the most recent WebWatch report, Afterlife boasts a dominant 20.05% share of online opinions among unreleased films. Harry Potter and the Deathly Hollows: Part I is the closest film to it with 11.12%. That's an incredibly healthy number even for a film that essentially has the weekend to itself.

On Facebook, Afterlife has established a solid following of more than 445,000 fans. The Expendables had around 265,000 fans on the day of its release, and that also appealed mainly to male moviegoers. The film's fan growth this week has been steady, but it's nowhere blockbuster levels.

Afterlife is outpacing the likes of Predators, Legion and Daybreakers on Twitter. That's another reassuring sign considering that thrillers such as Splice failed to inspire a lot of tweets and then ultimate failed at the box office.

Flixster spokesperson John Singh reports that Afterlife has an advance want-to-see rating of 84%, which is higher than any movie in the past several weeks.

As of 4 p.m. PT, Fandango.com is reporting that Afterlife is responsible for a solid 16% of daily sales. That number should pick up a bit tomorrow as more moviegoers plan for the weekend.

Expect Resident Evil: Afterlife to rake in $28 million from 2,800 locations during its debut frame.

The American, Machete and Going the Distance should all see substantial drops this weekend. The American is simply not a very commercial effort and word has surely gotten out about how slow and meditative it is. Machete is exactly the kind of action flick that delivers a front-loaded performance. As for Going the Distance, its debut was so underwhelming that it's hard to imagine that it'll be able to maintain any kind of real momentum.