A flick about a deadly train, an alien invasion thriller and a story about the adventures of a rookie television producer will try to do some damage at the box office this November. 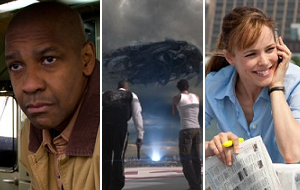 This week, we've added three new films to our Anticipation Index. Unstoppable, Skyline and Morning Glory are all set to open on November 12.

Unstoppable marks the fifth collaboration between director Tony Scott and Denzel Washington. The duo has earned a reputation for cranking out satisfying thrillers, and Unstoppable promises to deliver a similar punch to their last collaboration, Taking of the Pelham 1 2 3. Washington is still a very viable box office draw, so a #1 opening appears to be in the cards.

Skyline could sneak up and steal the thunder from Unstoppable. The alien invasion film boasts a very compelling trailer that doesn't give too much away, and that could help it break out in the same way that District 9 and Cloverfield did.

Morning Glory will be gunning for the same audience that came out in droves to support The Devil Wears Prada. While star Rachel McAdams hasn't really caught on as a mjaor draw on her own, being supported by Harrison Ford and Diane Keaton should help deliver solid grosses.