Coming off a slow weekend, a rush of new releases will struggle to grab the #1 spot 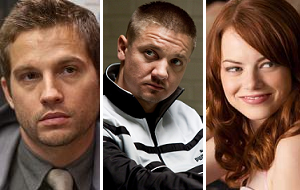 Two wolves, a bunch of bank robbers and Satan won't be able to fend off a teenage girl at the box office this weekend. Easy A, which stars Emma Stone (Superbad, Zombieland), looks poised to finish in first place.

After a rush of disappointing teen sex comedies (see College, Miss March, etc.), Easy A will give a boost to the genre. The film focuses on a high school girl who pretends to sleep with a bunch of nerds in order to boost their reputations. Of course, she eventually falls in love and has to come clean. Creating a sex comedy aimed at teen girls in a risky move, but the film obviously has its heart in the right place. It's already being compared to Mean Girls, the successful Lindsday Lohan vehicle that took aim at high school politics. Mean Girls opened to an impressive $24.4 million in 2004.

According to the most recent WebWatch report, Easy A leads all unreleased films with a 13.05% market share of online opinions. Jackass 3D is in second with 10.69%.

Facebook activity for Easy A has been very healthy. The film's most active page started the week with 270,000 fans and it's now well past the 340,000 mark. Letters to Juliet--another film aimed mainly at teenage girls--had 224,000 on the Wednesday before it hit theaters.

On Twitter, Easy A is inspiring more tweets than the likes of The Last Song, Zombieland and Charlie St. Cloud. A crucial endorsement from Taylor Swift help spur the rush of activity.

As of 4 p.m. PT, Fandango.com is reporting that Easy A represents a modest 5% of online sales. That number could increase on Thursday as the film's fickle teenage audience decides what to do on Friday night.

Look for Easy A to rake in $20 million from around 2,800 locations during its debut frame.

The Town is going to have a strong appeal among adult moviegoers who are looking for an intelligent action flick after a summer full of mindless ones. The bank heist flick marks Ben Affleck's second directorial effort. His first, Gone Baby Gone, grossed a modest $20.3 million after opening to only $5.5 million. It was able to hold on thanks to positive word-of-mouth.

A rush of positive reviews out of the Toronto International Film Festival should help the film considerably. Warner Bros. has also given The Town a comfortable marketing blitz led by a stirring theatrical trailer.

The Town's online activity is not very strong, but plenty of films aimed at adults have done well without generating a lot of online buzz. According to the most recent WebWatch report, The Town represents a modest 4.90% market share of online opinions.

The Town has yet to hit 10,000 fans on Facebook, and on Twitter it trails such films as The American, Brooklyn's Finest and Edge of Darkness.

As of 4 p.m. PT, Fandango.com is reporting that The Town is responsible for 14% of daily sales. That's a very reassuring figure, especially after the general lack of online buzz.

The Town should rake in $16 million from more than 2,700 locations during its debut frame.

Even though M. Night Shyamalan only created the story for Devil, his name is being used as a major selling point. Unfortunately, the writer/director of The Sixth Sense has been slowly diluting the goodwill he earned from that film with a series of disappointments. Reports of audiences laughing when his name comes up during the Devil trailer certainly don't bode well. A lot of moviegoers have simply grown tired of Shyamalan's usual tricks. Yet even though Shyamalan's reputation isn't what it once was, Devil should still appeal to moviegoers looking for cheap thrills.

Devil boasts a 6.58% market share of online opinions in the most recent WebWatch report. That's certainly not blockbuster-level activity.

On Facebook, Devil is adding fans at a pretty rapid rate. It started the week with 59,000 and it now has more than 87,000. The Last Exorcism had 53,000 fans on the Wednesday before its release.

On Twitter, Devil isn't generating as many tweets as The Crazies, The Fourth Kind and The Last Exorcism.

As of 4 p.m. PT, Fandango is reporting that Devil represents 5% of daily sales.

Expect Devil to open to $14 million from more than 2,700 locations.

Alpha and Omega has dud written all over it. Lionsgate has not given the film a very enthusiastic marketing push, and that's a death sentence for a film that's aimed at young children.

As of 4 p.m. PT, Alpha and Omega has yet to crack the top five sellers list on Fandango. Successful family films tend to sell a lot of tickets on online ticketing site.

Alpha and Omega should manage $7 million from 2,625 locations.

Tags: Easy A, The Town, Devil, Alpha and Omega