Weekend Predictions: 'Wall Street: Money Never Sleeps,' 'Legend of the Guardians: The Owls of Ga'Hoole,' 'You Again' and 'The Virginity Hit'

A financial drama, an owl tale and a female-driven comedy will compete for the #1 spot this weekend 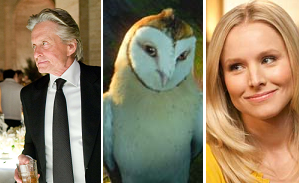 A movie about money is expected to make a lot of it at the box office this coming weekend.

Oliver Stone revisits the world of stock brokers, bankers and other financial professionals in Wall Street: Money Never Sleeps, a sequel that comes 23 years after its predecessor. Luckily, time has not diluted Stone's ability to capture the same tone that made the original a success, and a crucial part of that tone comes from the Gordon Gekko character. Michael Douglas is winning rave reviews for reprising his Oscar-winning role as a shifty tycoon who came to represent the greed and excess of America in the 80s.

The fact that Douglas is currently battling throat cancer has attracted a lot of media attention to Money Never Sleeps. The 65-year-old actor was able to attend the New York premiere of the film, but he probably will not be able to lend support to overseas promotion.

According to the most recent WebWatch report, Money Never Sleeps represents a modest 6.6% of online opinions among unreleased films.

For a film that will skew outside teen demographics that are most likely to show support for films on Facebook, Money Never Sleeps has built a very healthy following. With more than 150,000 fans, the financial drama has done an excellent job of mobilizing its base on the important website.

On Twitter, Oliver Stone's sequel is inspiring a healthy amount of tweets. Money Never Sleeps is outpacing the likes of Edge of Darkness and Green Zone.

As of 3 p.m. PT, Fandango.com is reporting that Money Never Sleeps is responsible for 28% of daily sales.

Expect Wall Street: Money Never Sleeps to rake in $27 million from around 3,400 locations during its debut frame.

Warner Bros. throws its hat into the world of 3D animation with Legend of the Guardians: The Owls of Ga'Hoole. Yet Owls is not a widely recognized property with a huge following, so it will face an uphill battle to find an audience. The overly serious tone of the trailers may also hurt Owls when it comes to appealing to very young moviegoers.

Owls represents only a 4.63% market share of online opinions among unreleased films. That's a very poor showing for an animated film, and it certainly doesn't portend blockbuster numbers.

Facebook support for Owls is incredibly weak. The film's most active page has yet to reach even 1,000 fans, which is disconcerting considering that Toy Story 3 and Shrek Forever After often added that many fans in a single day.

On Twitter, Owls is way behind the likes of How to Train Your Dragon and Shrek Forever After.

As of 3 p.m. PT, Fandango is reporting that Owls in 2D and 3D combined represents 12% of daily sales. That number could pick up on Thursday as more families make plans for the weekend.

Legend of the Guardians: Owls of Ga'Hoole should gross $19 million from around 3,500 locations during its debut frame.

You Again looks poised to join recent releases such as The Switch and Going the Distance as a movie aimed at female audiences that landed with a thud. The Disney release has very little momentum heading into the weekend, and the Mouse House has given it a very lackluster marketing campaign.

Star Kristen Bell does not fill seats on her own. When in Rome, her last starring vehicle, opened to only $12.4 million. You Again's supporting cast includes Sigourney Weaver, Jamie Lee Curtis and Betty White, which means Bell doesn't have a popular leading man to play off of. Weaver and Curtis certainly aren't the draws they once were, and the rush of admiration for White is running out of steam.

You Again holds only an anemic .70% share of opinions among unreleased films.

On Facebook, You Again trails the The Switch in terms of fan support. The Switch had more than 45,000 fans on the Wednesday before its release, You Again has only 34,000+.

Twitter activity for You Again is almost non-existant. The comedy is inspiring far less tweets than the likes of It's Complicated, When in Rome and Leap Year.

As of 3 p.m. PT, You Again has yet to crack the top 5 on Fandango's daily sales list.

You Again should manage a modest $9 million from around 2,300 locations during its debut.

After surprising most prognosticators with a healthy #1 debut last weekend, The Town should hold up very well during its sophomore frame. Word-of-mouth for the crime flick is incredibly positive. A third place finish is likely.

Tags: Wall Street: Money Never Sleeps, Legend of the Guardians: The Owls of Ga’Hoole, You Again