Weekend Predictions: 'The Social Network,' 'Let Me In' and 'Case 39'

An Internet genius, a child vampire and a social worker will try to grab the #1 spot this weekend 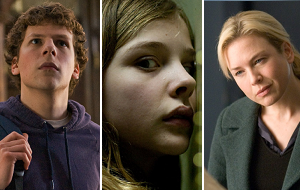 Wednesday Update: As we enter October three new wide releases will enter the marketplace on Friday. However, only one of the three, Sony's The Social Network, looks to make a major impact at this weekend's box office. The other two, Relativity's Let Me In and Paramount Vantage's Case 39, are targeting similar audiences and should limit the opening weekend potential of one another as a result. Odds are quite strong that The Social Network will out-gross the other two films combined this weekend.

The Social Network finds itself riding a wave of tremendous pre-release buzz, as both early reviews and online buzz are very strong for the film. Given the film's subject matter (the creation of Facebook) it should come as no surprise that online anticipation is high for the David Fincher directed film. The big question for The Social Network this weekend is to what degree the film's internet buzz can transfer into box office grosses.

According to BoxOffice.com's most recent WebWatch report, The Social Network is currently responsible for an 11.16 percent market share of Internet opinions among upcoming releases. That trails only Harry Potter and the Deathly Hallows: Part I, which is obviously a strong sign heading into the weekend.

Somewhat surprisingly The Social Network hasn't exploded on Facebook. However, the film has registered nearly 40,000 likes thus far. That is a solid number and that number is currently increasing at a very steady pace. The film is making much more noise on Twitter though, as Twitter users are excited about the film in a very big way. It is also possible that internet buzz levels for The Social Network could be inflated given the film's subject matter.

Over at Flixster The Social Network has experienced a huge surge in recent activity. According to Flixster spokesperson John Singh, "the Facebook movie has been generating a huge amount of press, which has helped lead to a 244% rise in week-over-week traffic at Flixster - a major increase by any standard." Singh also notes that "interest levels are very strong across the board, with only older females showing SLIGHTLY less interest than other groups. The strongest support comes from under-25 males."

As of 4 p.m. PT, Fandango.com is reporting that The Social Network is responsible for 17% of daily sales. That places it in first place at the moment at Fandango and represents a solid figure at this point.

Let Me In, the American remake of 2008's Let the Right One In, will hope to mark another successful vampire entry at the box office. However, the R-rated horror film directed by Matt Reeves hasn't been able to generate much internet noise in the weeks leading up to its release. That may not be a complete surprise given that the North American fanbase for Let the Right One In, while passionate, simply isn't very big compared to those of other more mainstream properties.

Let Me In is taking a clear backseat to The Social Network on WebWatch, as the film is currently responsible for just a 2.49 percent market share of Internet opinions among upcoming releases. Let Me In has a much bigger presence on Facebook, where it has registered over 120,000 likes. That is easily the biggest Facebook presence among this week's three releases and is a strong figure for a thriller in general. Twitter on the other hand has been a very different story, as the film has recorded the least amount of tweets among the week's three wide releases thus far this week.

As of 4 p.m. PT, Let Me In has failed to crack the top five at Fandango.

Let Me In is opening in an estimated 2,000 locations, which should limit its potential a bit this weekend (as will its R rating). Look for the film to open with $9.5 million, which will only be good enough for fifth place.

After a series of release date delays, Case 39 is finally set to be unleashed this weekend. The R-rated horror-thriller stars Renée Zellweger and also features Bradley Cooper in a supporting role. Although it isn't receiving a huge push by any means, Case 39 has been able to generate nearly identical internet activity as the higher-profile Let Me In.

According to WebWatch, Case 39 is actually a tad ahead of Let Me In with a 2.61 percent market share of Internet opinions among upcoming releases. Case 39 has also registered a few more tweets than Let Me In so far this week as well, but it should be noted that the film's tweet totals have been inflated from the film having already been released across other parts of the globe. Facebook has been another story, as Case 39 (with a total of nearly 22,000 likes) has been nowhere as strong as Let Me in.

Case 39 is also set to open in an estimated 2,000 locations. The film could be fairly close to Let Me In on Friday, but is likely to lose ground as the weekend goes on with Let Me In nearly certain to have the better word of mouth between the two. Look for Case 39 to score a sixth place debut of $6.5 million.

Turning to last weekend's top films, both Fox's Wall Street: Money Never Sleeps and Warner's The Town have held up well on Monday and Tuesday. That should transfer into a solid hold for Wall Street 2 and another good hold for The Town. Meanwhile, Warner's Legend of the Guardians: The Owls of Ga'Hoole will benefit from not facing any new direct competition for family dollars. Look for all three films to finish in the $10 million to $11 million range this weekend in a close battle for second place.

Tags: The Social Network, Let Me In, Case 39, Wall Street: Money Never Sleeps, Legend of the Guardians: The Owls of Ga'Hoole, The Town