Long Range Forecast: 'The Tourist' and 'Chronicles of Narnia: Voyage of the Dawn Treader' 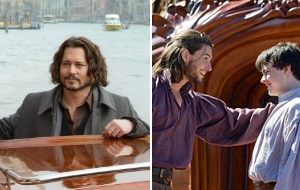 This week, we've added two new films to the Long Range Forecast. The Tourist and Chronicles of Narnia: Voyage of the Dawn Treader are both set to hit theaters on December 10.

It doesn't bode well that The Tourist is coming after the failure of Knight and Day and Killers, two star-driven vehicles that focused on a love affair between a professional espionage expert and a clueless bystander. The Tourist casts Angelina Jolie as the professional and Johnny Depp as the guy caught up in something beyond his control. Jolie is fresh off the $100 million+ domestic success of Salt, and Depp is at the height of his drawing power thanks to the Pirates of the Caribbean series. The duo should fair much better than Tom Cruise/Cameron Diaz in Knight and Day and Ashton Kutcher/Katherine Heigl in Killers.

The Narnia franchise is solid earner, but it will never reach Harry Potter levels. The third installment should scoop a decent amount of change during what's shaping up to be a particularly weak month of December for family films.

Tags: The Tourist, The Chronicles of Narnia: The Voyage of the Dawn Treader