Weekend Predictions: 'Secretariat' and 'Life as We Know It'

A dramedy, an inspirational horse-racing movie and a new 3D flick from a horror master will compete for the #1 spot this weekend 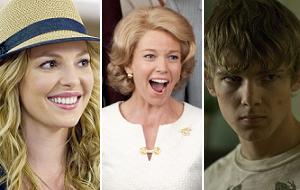 Disney's Secretariat seems poised to emerge victorious during a crowded weekend in which the top three films could be separated by only $1 million.

No studio does family entertainment like Disney, and after the recent disappointing performances of Legend of the Guardians: The Owls of Ga'Hoole from Warner Bros. and Alpha and Omega from Lionsgate, the time is right for the Mouse House to deliver. Secretariat is as old-fashioned as they come, but it will be an easy, comfortable choice for families seeking out wholesome entertainment.

According to the most recent WebWatch report, Secretariat boasts a 2.29% market share among unreleased films. While that's not an overwhelming number, it does put the drama slightly ahead of Life As We Know It at 2.12%.

Secretariat's Facebook activity has been very healthy this week. The Disney flick's most active page has been leading the three newcomers in fans added each day.

On Twitter, Secretariat is not really delivering. The Blind Side and It's Complicated were both inspiring a lot more tweets at the same point before hitting theaters.

As of 4 p.m. PT, Fandango.com is reporting that Secretariat represents 7% percent of daily sales. That number should pick up a bit on Thursday as more families plan for the weekend.

Look for Secretariat to bring in $15 million from around, 2,500 locations during its debut frame.

Life As We Know It star Katherine Heigl is on the ropes a bit after the mediocre performance of Killers this past summer, which opened to $15.8 million. That represents a significant drop from the $27.6 million opening of The Ugly Truth in July '09. Unfortunately, Life As We Know It doesn't look like it will improve upon Killers. Despite an aggressive market campaign, there's just not a palpable sense of buzz for the dramedy. It also doesn't help that Secretariat is bound to skew heavily female.

The most active Facebook page for Life As We Know It lacks momentum. The page has only recently reached 12,000 likes, and that's an incredibly weak number for a film aimed at females. The Switch had more than 40,000 on the Wednesday before its release, while Letters to Juliet had more than 200,000.

Twitter activity is also mediocre. Life As We Know It is generating less tweets than Killers and The Switch.

As of 4 p.m. PT, Fandango is reporting that Life As We Know It has yet to crack the top five sellers list.

My Soul to Take's timing is off. Moviegoers looking for thrills are most likely to wait until closer to Halloween when Paranormal Activity 2 and Saw 3D are unleashed. For proof, look no further than the disastrous performance last weekend of two thrillers: Let Me In and Case 39.

The latest directorial effort from Wes Craven has only a 1.71% market share of online opinions, which is a very disconcerting sign considering that successful horror films inspire plenty of online buzz compared to other genres.

My Soul to Take has built a solid following on Facebook. With close to 80,000 fans on its most active page, the new horror flick is not too far behind The Last Exorcism, which had around 95,000 fans on Wednesday before its release.

Twitter activity for My Soul to Take leaves a lot to be desired, with its tweet volume trailing the likes of Devil, Let Me In and Case 39.

My Soul to Take has yet to crack the top five on Fandango.com.

Look for My Soul to Take to rake in $6 million from 2,400 locations during its opening frame.

Tags: Life as We Know It, My Soul to Take, Secretariat