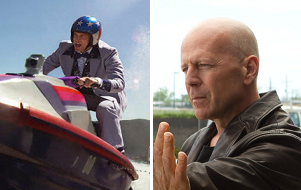 Two new wide releases will attempt to end The Social Network's two-week reign at the box office this weekend. After a four-year absence the Jackass crew returns to theatres, this time in 3D, in Paramount's Jackass 3D. While Jackass 3D is the clear favorite, Summit's action-comedy Red also looks to get off to a good start this weekend and will hope to serve as an alternative for non-Jackass fans.

With Jackass 3D the Jackass franchise represents the latest property to go the route of 3D. That decision in combination with a very effective marketing campaign has helped build a strong level on online buzz for the film. Four years between films can sometimes be a problem for a franchise, but the healthy Internet presence for Jackass 3D strongly suggests that won't be a factor at all here.

According to BoxOffice.com's most recent WebWatch report, Jackass 3D is currently responsible for a 15.32 percent market share of Internet opinions among upcoming releases. That is the second highest current percentage of any upcoming release, behind only Paranormal Activity 2.

Jackass 3D has had a strong presence on Twitter this week. While the film's target demographics run very much in line with key Twitter demographics, it is on pace to register more tweets than other films with strong Internet followings such as Zombieland, Kick-Ass and Resident Evil: Afterlife.

Over on Facebook, the film has a truly huge presence as it has registered nearly 2.18 million likes to date. Just as importantly, the film is continuing to add more likes at a very frequent pace of more than 15,000 new supporters a day this week.

As of 4 p.m. PT, Fandango.com is reporting that Jackass 3D is responsible for 28 percent of daily sales. That is a strong Wednesday figure for a new release.

Jackass 3D will open in an estimated 2,500 locations this weekend. With the added benefit of 3D ticket prices the film should be able to post a very impressive per-location average. Recently with the aid of 3D, Resident Evil: Afterlife was able to open 12.5 percent higher than the previous film in its franchise, 2007's Resident Evil: Extinction. Jackass 3D will hope to see a similar type of increase over the $29.0 million start of 2006's Jackass Number Two. Look for Jackass 3D to easily take first place this weekend with a debut of $31.0 million.

Bruce Willis returns to theatres in Red, an adaptation of the comic book mini-series of the same name. In addition to Willis, the film's impressive cast also includes Morgan Freeman, John Malkovich and Helen Mirren. With Red, Summit will try to draw in some of the same moviegoers that made The Expendables a surprise hit for Lionsgate back in August. Unfortunately, Red hasn't been able to generate anywhere near the same type of online presence that The Expendables was able to.

On WebWatch, Red is only responsible for a 1.40 percent market share of Internet opinions among upcoming releases. That lack of an online presence has clearly been mirrored on Facebook, where the film has only been able to register just over 10,000 likes so far. Given that Red is likely to skew heavily towards older moviegoers, the lack of Facebook activity isn't much of a surprise. On the positive side of things, the film's Facebook fan count is actually very similar to that of The Town on the Wednesday before its release.

Twitter has delivered more of the same for Red, as the Twitter universe is tweeting significantly less about the film than it was for previous Bruce Willis vehicles Surrogates and Cop Out. However, it should also be strongly cautioned that the film's extremely generic title is making it much more difficult than usual to track online discussion for the film.

As of 4 p.m. PT, Fandango.com is reporting that Red is responsible for a modest 3 percent of daily sales.

Red is opening in an estimated 3,000 locations. The large location count should help limit some of the effect of the film's lack of online buzz. Last fall Surrogates opened to $14.9 million and Red will look to open in the same neighborhood. Expect Red to deliver a second place debut of $14.5 million.

With only two wide releases this weekend and one of the two having a pre-established fanbase, most holdovers should be able to experience respectable declines this weekend. Furthermore, both Sony's The Social Network and Disney's Secretariat should benefit from strong word of mouth. Look for The Social Network to land in third place with $10.7 million and for Secretariat to take fourth place with $8.7 million.

Warner's Life as We Know It likely won't hold up as well, especially since Katherine Heigl's films typically experience notable second weekend declines. Expect Life as We Know It to round out this weekend's top five with $8.5 million.

Tags: Secretariat, LIfe As We Know It, Red, Jackass 3D, The Social Network