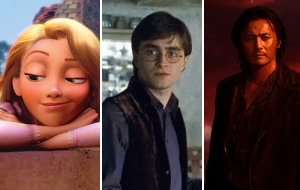 The Warrior's Way is the only new wide release this weekend, and it won't come close to topping either Harry Potter and the Deathly Hallows: Part I or Tangled.

Even though Tangled wasn't able to beat Potter last weekend, it should have no problem claiming the #1 spot this weekend. Disney's 50th animated feature is generating some very enthusiastic reactions. Tangled snagged a rare A+ overall rating from CinemaScore, and it currently boasts a very healthy 92% approval rating from nearly 33,000 user ratings on Flixster.

On Facebook, Tangled has approximately 160,000 new supporters since opening last Wednesday. Although, the animated flick has lot some steam on Twitter. It currently ranks behind Potter, Burlesque and TRON: Legacy.

As of 4 p.m. PT, Fandango.com is reporting that Tangled is responsible for 6% of daily sales. That number should increase on Thursday as more families plan for the weekend.

Look for Tangled to rake in another $26 million during its sophomore frame.

After two weekends at #1, Deathly Hallows: Part I is bound to stumble quite a bit. At this point, it's up to die-hard fans who enjoy multiple viewings to keep Potter alive at the box office.

According to Boxoffice.com's most recent WebWatch report, Deathly Hallows: Part I holds a 13.40% share of online opinions among released films. That puts it way ahead of Tangled, Burlesque and Megamind.

As of 4 p.m. PT, Fandango is reporting that Deathly Hallows: Part I is responsible for 26% of daily sales.

Harry Potter and the Deathly Hallows: Part I should manage $18 million during its third weekend in theaters.

Expectations are modest for The Warrior's Way. The Relativity release is only opening at around 1,500 locations, and the shadow of Potter and Tangled is very large. The assassin flick is bound to skew heavily male, but its core audience may just be saving its money for TRON: Legacy on December 17.

On Facebook, Warrior's Way has nearly 30,000 supporters, which puts it behind Faster's 35,000+ total two days before its release last week. Twitter doesn't provide much reassurance considering that Warrior's Way is pacing behind Ninja Assassin and Repo Men.

Warrior's Way has yet to break into the top five sellers list on Fandango.

Expect The Warrior's Way to rake in $4 million during its opening weekend.

Fox Searchlight is sending out Black Swan this weekend. The latest effort from director Darren Aronofsky (The Wrestler) has won tons of rave reviews, and it has Oscar buzz to spare. The ballet thriller is bound to have a very healthy location average from 19 engagements before eventually expanding across the country.

Tags: Tangled, Harry Potter and the Deathly Hallows: Part I, The Warrior's Way