Weekend Predictions: 'The Chronicles of Narnia: The Voyage of the Dawn Treader' and 'The Tourist' 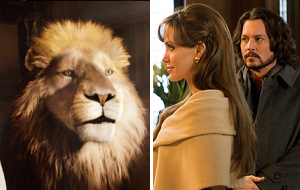 The Chronicles of Narnia: The Voyage of the Dawn Treader and The Tourist will both try to grab the #1 spot at the box office this weekend. While The Tourist has star power to spare, Dawn Treader clearly has the edge thanks to an established fan base.

While the Narnia franchise was hailed as "the next Harry Potter" after the first film raked in nearly $740 million worldwide, the second installment—Prince Caspian —stumbled in the summer of 2008 with a comparatively disappointing $419 million worldwide haul. As a result, expectations have been lowered for Dawn Treader. Yet even with lowered expectations, the fantasy franchise is still a major force.

It's worth noting that the first Narnia opened in December, while Prince Caspian hit theaters in May. If Dawn Treader ends up passing Prince Caspian's gross, it'll be a clear indication that the franchise is truly at home during the fall season.

According to Boxoffice.com's latest WebWatch report, Dawn Treader ranks behind only TRON: Legacy when it comes to the volume of online opinions about unreleased films. The fantasy flick boasts a solid 8.60% market share of opinions.

On Facebook, Dawn Treader is adding fans at a consistent rate, but it's not inspiring anywhere near the same enthusiasm as Harry Potter and the Deathly Hallows: Part I or Toy Story 3.

Dawn Treader's Twitter activity is disappointing. The 20th Century Fox release is generating far less tweets than the likes of Shrek Forever After, Megamind and Despicable Me.

As of 4 p.m. PT, Fandango.com is reporting that Dawn Treader is responsible for 29% of daily sales. That number may increase even more on Thursday as more families begin to plan for the weekend.

Expect The Chronicles of Narnia: The Voyage of the Dawn Treader to rake in $35 million from around 3,500 locations.

The Tourist's Johnny Depp and Angelina Jolie are two of the most reliable draws working today. Unfortunately, their pairing is plagued by bad buzz right out of the gate. The Tourist comes on the heels of Knight and Day and Killers, two recent disappointments that tried unsuccessfully to pull off a mix of action and romance with huge stars. That formula is growing stale real quick.

The Tourist is quite strong on Facebook. With nearly 300,000 supporters and counting, it is far outpacing Salt. Angelina Jolie's last starring vehicle had around 165,000 fans on the Wednesday before its release. On Twitter, The Tourist is outpacing Due Date and Unstoppable.

As of of 4 p.m. PT, Fandango is reporting that The Tourist is responsible for 3% of daily sales.

Look for The Tourist to grab $25 million from around 2,600 locations during its debut frame.

Tags: The Chronicles of Narnia: The Voyage of the Dawn Treader, The Tourist