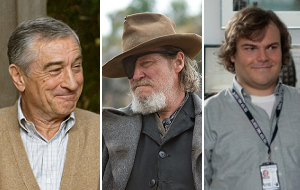 With no new wide releases hitting theaters this weekend, Little Fockers and True Grit will both have strong sophomore frames. Paramount's western even has a shot at claiming the #1 spot.

It's quite clear that audiences aren't that crazy about Little Fockers. The Universal release received a B- from CinemaScore last weekend, which is not a good grade for a comedy. On Flixster, Little Fockers has only a 60% approval rating from nearly 76,000 user reviews.

According to Boxoffice's most recent WebWatch report, Little Fockers is still #1 in terms of its share of online opinions among released films with 8.52%. It's only slightly ahead of TRON: Legacy's 7.59% share.

Facebook activity for Little Fockers has been modest. The comedy's most active page has tacked on close to 40,000 new supporters since opening last Wednesday. That number doesn't exactly indicate glowing word-of-mouth. On Twitter, Little Fockers is still comfortably ahead of True Grit and TRON: Legacy.

As of 3 p.m. PT, Fandango.com is reporting that Little Fockers accounts for 11% of daily sales.

Little Fockers should manage $26 million during its sophomore frame.

The reaction to True Grit is far more passionate than what Little Fockers is seeing. The Western snagged a B+ from CinemaScore, and the Flixster approval rating is at 91% from around 35,000 user reviews.

On Facebook, True Grit has tripled its base from around 8,700 fans last Wednesday to more than 25,000 now. That's very impressive for an adult-skewing film. True Grit trails only Little Fockers and TRON: Legacy on Twitter.

Fandango is reporting that True Grit leads daily sales with 14% as of 3 p.m. PT.

Look for True Grit to take in $24 million this coming weekend.

TRON: Legacy is poised for a third place finish. After a somewhat underwhelming debut, Disney's sci-fi flick is holding up quite well, and it's responsible for 12% of daily sales on Fandango. A haul of $21 million looks likely during the sequel's third weekend in theaters.

Gulliver's Travels will see a small jump in grosses from its underwhelming debut frame. Films aimed at families tend to hold up well this time of year, even if they don't have much to hold on to. Look for the Jack Black vehicle to tack on another $7.5 million with the help of 500 more locations.