Weekend Predictions: 'The Green Hornet' and 'The Dilemma' 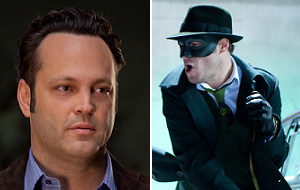 An unconventional crime fighter should have no problem taking down a strong comedic pairing at the box office during the four-day holiday frame.

The Green Hornet finds star Seth Rogen outside of his comfort zone. The actor has built a lucrative career out of playing laid-back "average" guys, but he trimmed down to inhabit the coveted Green Hornet role. It's a risk that's likely to pay off. After being hit with a wave of serious Oscar contenders, moviegoers will be more than ready to digest a comic book adaptation that doesn't take itself too seriously. The major downside is that Green Hornet is bound to skew heavily male, and that will stop it from becoming a major blockbuster. Expect a seriously front-loaded performance at the box office.

According to BoxOffice.com's most recent WebWatch report, The Green Hornet boasts a healthy 21.35% market share of online opinions among unreleased films. The closest film is Justin Bieber: Never Say Never with 13.81%. While any movie aimed at the male 18-34 demographic is bound to generate a ton of online comments, it's a good sign that The Green Hornet holds such a dominant stake at a time when trailers for the likes of Transformers: Dark of the Moon and Fast Five are also generating plenty of buzz.

On Twitter, The Green Hornet is easily inspiring more tweets than the likes of Zombieland and Kick-Ass. It also currently leads all films—both released and unreleased—in terms of daily tweet totals. On Facebook, The Green Hornet's most active page has nearly 190,000 supporters. By comparison, Salt also had around 190,000 supporters on the Wednesday before hitting theaters. The Angeline Jolie vehicle opened to $36 million.

As of 4 p.m. PT, Fandango.com is reporting that The Green Hornet is responsible for a solid 6% of daily sales.

Look for The Green Hornet to rake in $37 million from around 3,500 locations over four days.

The comedic pairing of Vince Vaughn and Kevin James in The Dilemma is bound to deliver healthy receipts at the box office. Vaughn is one of the most reliable comedic actors working today, and James has accomplished the tough task of transitioning from television stardom to theatrical success with the likes of Hitch, Paul Blart: Mall Cop and Grown Ups. It doesn't hurt that Vaughn and James are backed by a strong supporting cast that includes Jennifer Connolly, Winona Ryder and Channing Tatum. Plus, director Ron Howard's name comes with quite a bit of mainstream trust.

Much like Couples Retreat and It's Complicated, The Dilemma is not the type of film that is going to set online forums on fire with tons of comments. It's an easy, comfortable choice for adults looking to find a great date night option. As a result, The Dilemma boasts only a 3.32% market share of online opinions among unreleased films. That figure is not cause for concern.

The Dilemma is only slightly behind the likes of Couples Retreat, The Other Guys and Due Date on Twitter, and that's a very reassuring sign. Facebook activity is also steady. The Dilemma's most active page has added more than 6,000 new supporters this week.

Fandango is reporting that The Dilemma has yet to secure a place among the top five sellers. That could change on Thursday when more couples begin to plan for the weekend.

Expect The Dilemma to pull in $25 million from around 2,900 locations during its prolonged debut frame.

Tags: The Dilemma, The Green Hornet