Weekend Predictions: 'The Rite,' and 'The Mechanic' 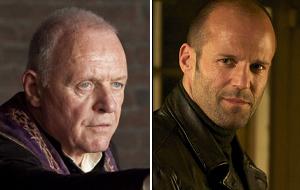 The Rite should have no problem fending off fellow newcomer The Mechanic and reigning champ No Strings Attached in order to claim the #1 spot at the box office this coming weekend.

Horror junkies can't seem to get enough of films about exorcisms. The Last Exorcism opened to $20.4 million last August before ending up with $41 million domestically. That's not exactly a blockbuster-level haul, but it's healthy all the same considering that the Lionsgate release came with an estimated total budget of around $23 million. The Rite will appeal to the same audience that lined up for The Last Exorcism.

According to the most recent WebWatch report, The Rite only holds a 2.18% market share of online opinions among unreleased films. That is definitely cause for for concern. Horror enthusiasts tend to be very vocal online when they are interested in a film, and The Rite simply isn't generating a lot of passionate discussions.

On Twitter, The Rite is trailing the likes of Legion, The Wolfman and Season of the Witch. Facebook activity doesn't provide much reassurance. The Rite's most active page only has around 14,000 supporters, and approximately 3,200 have been added since Monday. The Last Exorcism had close to 95,000 fans on the Wednesday before hitting theaters.

Look for The Rite to bring in $13.5 million from around 2,900 locations during its debut frame.

The Mechanic's Jason Statham has a loyal following, but not a big one. As a result, expectations for The Mechanic are modest. Co-star Ben Foster adds next to nothing in terms of drawing power, and Statham doesn't have a recognizable leading lady by his side.

The latest WebWatch report reveals that The Mechanic holds a 2.18% market share of opinions, tying it with The Rite. That's not a good sign for a film that should be hitting the males 18-34 demographic in a big way.

On Twitter, The Mechanic is pacing behind Faster and Green Zone. Facebook activity is also very weak. The Mechanic's most active Facebook page has added only around 2,000 new supporters since Monday, pushing its total to around 30,000. Faster had 35,000 fans on the Wednesday before hitting theaters.

Expect The Mechanic to bring in $8.5 million from approximately 2,700 locations during its debut frame.

No Strings Attached should be able to hold up quite well during its sophomore frame. All signs point positive word-of-mouth for Paramount's romantic comedy. The film's most active Facebook page has added nearly 40,000 new supporters since last Friday. On Flixster, No Strings Attached boasts a healthy 72% approval rating from more than more than 18,000 user reviews.

Look for No Strings Attached to bring in $12 million this coming weekend.

Tags: The Rite, The Mechanic, No Strings Attached