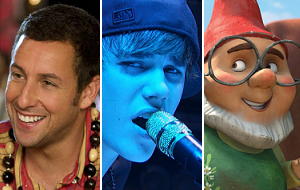 The pairing of Adam Sandler and Jennifer Aniston will have no problem fending off a teen sensation, garden gnomes and a bunch of roman soldiers at the box office this weekend.

Sandler is fresh off the success of last summer's Grown Ups—a $162 million domestic hit that pleased his loyal fan base—and Aniston has shown that she's able to produce strong numbers when paired with a successful leading man. Both actors have earned plenty of trust from mainstream moviegoers, so this one is a no-brainer. It also helps that Just Go With It is coming out in time for Valentine's Day. Moviegoers will be in the mood for a romantic comedy.

According to BoxOffice.com's most recent WebWatch report, Just Go With It represents only a 1.94% market share of online opinions among unreleased films. Most of the time that would be something to worry about, but Just Go With It is an adult-skewing comedy and it must be judged in a different way. Couples Retreat and It's Complicated—two other star-driven comedies aimed at adults—lacked serious activity online and they still performed well at the box office.

On Twitter, Just Go With It is pacing behind the likes of Grown Ups and Couples Retreat, but not by much. Facebook activity is promising since Just Go With It's most active page has around 55,000 more supporters than Grown Ups did on the Wednesday before hitting theaters.

As of 3 p.m. PT, Fandango.com is reporting that Just Go With It represents 4% of daily sales. That number could increase on Thursday as more couples begin to plan for the weekend.

Look for Just Go With It to rake in $34 million from around 3,400 locations during its debut frame.

Despite boasting a massive online following, Justin Bieber doesn't seem to have what it takes to open a movie. The young crooner has no problem causing a frenzy among pre-teen girls, but it's becoming clear that his fan base isn't quite ready to fork over money for a 3D theatrical release.

Since Justin Bieber is a true sensation online, it comes as no surprise that Facebook and Twitter activity is plentiful. Bieber's most active page has nearly 21 million supporters, which makes it a great platform to promote the film on. On Twitter, Never Say Never is actually experiencing a surprising dip in activity. When it comes to films aimed at teens, strong online activity can be misleading. Just look at the failure of Scott Pilgrim vs. the World and Charlie St. Cloud to deliver after generating a bunch of online buzz. Unfortunately, Never Say Never seems doomed follow in their footsteps. The industry as a whole is definitely lowering expectations.

Fandango.com is reporting that Never Say Never is responsible for 72% of daily sales. While strong, it's not the kind of dominant number that teen-skewing flicks usually deliver.

Expect Justin Bieber: Never Say Never to open to $17 million from around 3,000 locations during its opening weekend.

Gnomeo and Juliet marks one of the first easy choices for families in 2011. Even though voice cast members such as James McAvoy and Emily Blunt aren't huge stars, the Disney brand alone is all that's needed for the film to open well. Also, the use of new Elton John songs will stir up warm memories of The Lion King.

With nearly 95,000 supporters on Facebook, Gnomeo and Juliet has built a healthy following. Despicable Me had close to 136,000 Facebook fans on the Wednesday before release On Twitter, the animated flick is outpacing Alpha and Omega and Legend of the Guardians: The Owls of Ga'Hoole.

Fandango is reporting that Gnomeo and Juliet is responsible for 4% of daily sales.

Gnomeo and Juliet looks poised to rake in $16 million from around 2,700 locations.

The Eagle is suffering from a severe lack of momentum. Stars Channing Tatum and Jamie Bell are simply not box office draws on their own, and the film is aimed at a lot of the same male demographics that obsessively follow Adam Sandler. Expectations for the Focus release are modest.

On Twitter, The Eagle is outpacing The Warrior's Way, but it's slightly behind Season of the Witch. The film's Facebook fan count is a respectable 37,000. Season of the Witch had approximately 48,000 fans on the Wednesday before hitting theaters.

The Eagle should manage $6.5 million from around 2,150 locations.