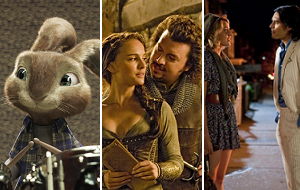 Four new wide releases aimed at different demographics will not be enough to topple Universal's HOP at the box office this coming weekend.

While HOP isn't exactly blowing moviegoers away, it remains a very safe option for family audiences. Since opening last Friday, the animation/live-action hybrid has added more than 45,000 supporters to its most active Facebook page, which certainly marks a healthy jump. The fact that the overall CinemaScore rating is an A- also bodes well. Only on Flixster is the film showing some serious weakness with a mediocre 60% approval rating from nearly 16,000 users.

As of 3 p.m. PT, Fandango.com is reporting that HOP is responsible for 23% of daily sales. That figure should remain steady on Thursday.

Look for HOP to rake in $24 million during its sophomore frame.

Arthur has emerged as a clear frontrunner among the new releases. The remake is a perfect date night option, which means it's also bound to skew slightly female. Look for the Warner Bros. release to have a strong appeal among moviegoers 25+ who remember the original fondly.

According to BoxOffice.com's WebWatch, Arthur represents a 3.84% market share of online opinions among unreleased films. While not exactly an impressive number, it's not cause for concern. Many successful romantic comedies—Couples Retreat, Just Go With It, etc.—failed to generate a ton of online buzz.

Twitter activity is very promising for the Russell Brand vehicle considering that it's easily outpacing the likes of Get Him to the Greek and The Invention of Lying. Facebook leaves a bit to be desired. Arthur has barely crossed the 10,000 fan mark, but that could be due to the fact that searching simply "Arthur" on Facebook brings back results that overshadow the film's most active page.

Fandango is reporting that Arthur is responsible for 2% of daily sales. That number could pick up slightly on Thursday.

Expect Arthur to take in $17 million from 3,200 locations during its debut frame.

Despite boasting one the year's most impressive comedic ensembles, Your Highness has "dud" written all over it. The period setting seems forced and the jokes come across as painfully juvenile. Your Highness will have a tough time appealing outside of the fanboy crowd—a problem that also plagued Universal's Scott Pilgrim vs. the World and Paul.

WebWatch shows that Your Highness has only a 2.13% market share of online opinions among unreleased films. That's terrible for a film that should appeal to the kind of moviegoers who obsessively comment online.

Your Highness is bombing on both Facebook and Twitter. The Universal release's most active page has slightly more than 124,000 supporters, which pales in comparison to the 160,000 that Paul had on the Wednesday before opening. On Twitter, Your Highness is inspiring considerably less tweets than the likes of Hot Tub Time Machine and Sucker Punch.

Fandango is reporting that Your Highness has yet to make any kind of real impact today.

Soul Surfer is the kind of motivational drama that could end up amassing a healthy following. FilmDistrict is clearly gunning for the same religious audience that turned The Blind Side into a massive hit. Expect a relatively modest opening followed by a strong hold.

Soul Surfer is running close to Beastly on Twitter, but it's outpacing Ramona and Beezus by a healthy margin. On Facebook, Soul Surfer's most active page has amassed nearly 18,000 fans—Ramona and Beezus had only close to 10,000 on the Wednesday before opening.

Fandango is reporting that Soul Surfer is responsible for a promising 6% of daily sales, which is a clear sign that families see it as a viable option.

Expect Soul Surfer to rake in $10.5 million from around 2,100 locations during its opening frame.

Hanna's most active Facebook has more than 60,000 fans—The American had around 59,000. On Twitter, Hanna is outpacing The American and running surprisingly close to Limitless. Both are clear signs that Focus' marketing blitz is doing an excellent job selling a decidedly unconventional action flick.

Hanna should manage $10 million from around 2,500 locations.