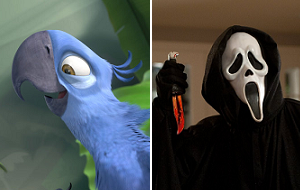 The latest installment in Wes Craven's popular Scream franchise should have no problem fending of a new animated flick from the director of Ice Age at the box office this coming weekend.

Scream 4 has the opportunity to grab the attention of a wide range of horror junkies. For moviegoers 18-25 years old it will mark the first time that they'll be old enough to see a Scream film in theaters as opposed to sneaking a viewing on HBO after their parents fell asleep. For moviegoers over 30 the sequel will represent a blast of nostalgia.

With box office grosses down more than 20% from last year, the market is ripe for a familiar property to swoop in and provide a comfortable choice for adults looking to be entertained. Scream 4 is poised to do just that.

According to BoxOffice.com's WebWatch, Scream 4 represents a staggering 26.4% market share of online opinions among unreleased films. The closest competitor is this summer's Monte Carlo with 11.01%.

Twitter is on fire with Scream 4 tweets. The horror flick is generating more tweets than Justin Bieber: Never Say Never, and it's also in the same league as Inception and Alice in Wonderland. On Facebook, Scream 4's most active page has added more than 18,000 new fans since early Monday morning. That's impressive considering that it already had a healthy base of more than 300,000 heading into the week.

As of 4 p.m. PT, Fandango.com is reporting that Scream 4 represents 16% of daily sales. Paranormal Activity 2 tallied 23% on the Wednesday before opening, while Saw 3D had 15%.

Expect Scream 4 to post a whopping $45 million opening from around 3,300 locations. When adjusting for inflation, Scream 2's $32.9 million debut will still easily be the best since it equates to around $56.6 million.

Even though HOP still has a strong presence in the market, there will be more than enough room for Rio to succeed. Director Carlos Saldanha helped successfully launch the Ice Age franchise, and now there's a good chance he'll launch another. Families are hungry for quality content and the words "from the creators of Ice Age" will be all they need to hear.

Rio boasts only a 2.13% market share of online opinions, but that's far from a death sentence. It's just a clear sign that the film isn't breaking out in a major way beyond families with young children.

On Twitter, Rio is outpacing HOP by a healthy margin. Unfortunately, Rio's success on Twitter hasn't been matched on Facebook. The fact that Rio's most active page is hovering around only 29,000 supporters is another sign that moviegoers without children aren't that excited about it.

Fandango is reporting that Rio is tied with Scream 4 at 16% of daily sales. That's a perfectly healthy number for a family film.

Look for Rio to take in $37 million from around 3,800 locations during its debut frame.

Roadside Attractions will open The Conspirator at around 700 locations this weekend. The historical drama about Abraham Lincoln's assassination is bound to hit a decent amount of moviegoers aged 35+, but expectations are still very modest due to the low location counts. A $1.8 million debut is likely.