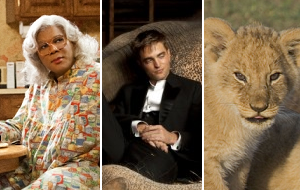 Tyler Perry's beloved Madea character should have no problem fending off an adaptation of a popular novel and a nature documentary at the box office this coming weekend.

Madea's Big Happy Family is the third film to star Madea, Perry's boisterous alter ego. The opinionated old woman is 2-for-2 at the box office. 2006's Madea's Family Reunion took in $30 million during its opening frame before ending up with $63.3 million domestically, while 2009's Madea Goes to Jail remains Perry's most financially successful effort to date with a $41 million debut and a $90.5 million haul. It makes sense that Perry would return to safe, familiar territory after branching out with last year's drama, For Colored Girls. Some of the multi-hyphenate's fans may have been turned off by the uncompromising nature of Girls, and they'll welcome a return to comedy.

According to BoxOffice.com's WebWatch, Madea's Big Happy Family represents only a 2.78% market share of online opinions among unreleased films. While not a great number, it's not cause for concern. Madea is such an established presence by now that moviegoers will simply show up without feeling the need to passionately discuss the film online.

Madea's Big Happy Family is performing in step with Perry's other films on Twitter. On Facebook, Perry's most active page has added only around 10,000 new supporters this week, but the page already has a base of nearly 1.3 million.

As of 4 p.m. PT, Fandango.com is reporting that Madea's Big Happy Family is responsible for 5% of daily sales. That number could increase on Thursday as more moviegoers plan for the weekend.

Look for Madea's Big Happy Family to take in $29 million from around 2,100 locations during its debut frame.

Water for Elephants has quite a lot going for it. It's based on the best-selling novel by Sara Gruen, so that gives it a built-in audience. Add to that the fact that any director would kill to have the film's three leads, Reese Witherspoon, Robert Pattinson and Christoph Waltz, and you have what looks like a hit. Elephants is bound to appeal more to moviegoers aged 25+, and that means there may not be a huge opening weekend rush. Expect the film to show decent legs even as Fast Five and Thor begin to dominate multiplexes in the weeks to come.

Online buzz is surprisingly strong for Elephants. The drama leads all unreleased films with a 17.24% market share of online opinions. The presence of Robert Pattinson certainly accounts for a lot out of those comments.

On Facebook, Water for Elephants' most active page has added nearly 50,000 new supporters since early Monday morning. That's a very healthy number for a drama aimed at adults. Twitter activity is also very strong. Water for Elephants is inspiring more tweets than Remember Me and Charlie St. Cloud.

Fandango is reporting that Water for Elephants accounts for 10% of daily sales. That impressive figure could jump even higher tomorrow as more couples plan for the weekend.

Expect Water for Elephants to take in $18 million from about 2,700 locations during its debut frame.

Disneynature has found modest success with theatrical releases timed to Earth Day celebrations. 2008's Earth took in $8.8 million during its opening weekend even after debuting on Wednesday, and it ended its domestic run with $32 million. 2009's Oceans captured $6.1 million during its opening frame after a Thursday opening on its way to a $19.4 million domestic cume. There's no reason to expect that African Cats won't post similar numbers, and the fact that it opens on a Friday means that its weekend number won't be diluted by a mid-week opening.

According to WebWatch, African Cats boasts a modest 2.84% market share of opinions. That's not bad at all for a film aimed mostly at families and animal enthusiasts.

The African Cats page on Facebook only has around 3,000 supporters, so it's clearly not having much of an impact there. On Twitter, the nature doc is doing surprising well when compared to Oceans.

Fandango reports that African Cats is responsible for a respectable 6% of daily sales.

African Cats should bring in $8 million from close to 1,200 locations during its debut frame.