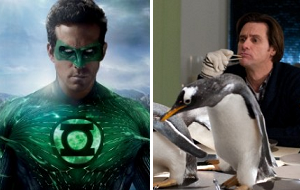 Wednesday Afternoon Update: The onslaught of superhero films continues this weekend with Green Lantern, an origin story that will have no problem fending off fellow newcomer Mr. Popper's Penguins.

The success of any major studio is partially dependent on how well they can form franchises, and Warner Bros. is clearly hoping that Green Lantern will be a new one. Stars Ryan Reynolds and Blake Lively are both rapidly building their drawing power, which makes them perfect anchors for a new franchise. Unfortunately, Green Lantern may suffer a bit from the fact that it's being released after two other superhero origin stories: Thor and X-Men: First Class. Thor opened to $65.7 million, while First Class managed $55.1 million. Lantern will inevitably be compared to those films and an opening of less than $50 million will be labeled a failure—fairly or not.

As of 4 p.m. PT, Fandango.com is reporting that Green Lantern is responsible for 7% of daily sales. Even though Lantern is being overshadowed by Harry Potter and the Deathly Hallows: Part 2's 52% daily haul, 7% is certainly not a blockbuster-level figure.

Look for Green Lantern to take in $50 million from around 3,600 locations during its debut frame.

Jim Carrey may have two or three huge earners left in him, but Mr. Popper's Penguins certainly isn't shaping up to be one of them. The comedy has never really rebounded from the mediocre reaction to its first teaser trailer. Family audiences seem prepared to simply save their money for Cars 2 next weekend.

Mr. Popper's Penguins isn't performing as poorly as Gulliver's Travels on Twitter and Facebook, but it's way behind The Karate Kid, another June release aimed at families.

Fandango is reporting that Penguins has yet to crack the top five sellers list. That's a very disconcerting sign.

Tags: Green Lantern, Mr, Popper's Penguins, The Art of Getting By