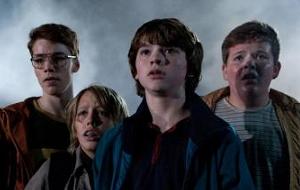 There will be a heated battle between Super 8 and X-Men: First Class for the top spot at the box office this coming weekend. We're giving the edge to Super 8.

Do not expect the latest effort from director J.J. Abrams to post a blockbuster debut. If Super 8 is a hit, it'll be because it maintained steady business over the course of several weekends. Paramount announced today that the film will open on Thursday on 300 screens—239 of which are IMAX—in attempt to get some buzz started early. Paying close attention to activity on Facebook and Twitter will be crucial to understanding how well Super 8 will perform in the weeks to come. Word will get out fast due to a palpable hunger for details that have been intentionally kept out of the marketing campaign.

According to Boxoffice.com's WebWatch, Super 8 accounts for a 7.29% market share of online opinions. The sci-fi flick ranks behind three juggernauts: The Twilight Saga: Breaking Dawn - Part I, Harry Potter and the Deathly Hallows: Part II and Transformers: Dark of the Moon.

Super 8's Facebook activity leaves a lot to be desired. The film's most active page has tacked on only 3,100+ new likes since early Monday morning for a total of 54,000 and counting. Battle: Los Angeles had close to 162,000 on the Wednesday before hitting theaters. On Twitter, Super 8 is outpacing Battle: Los Angeles, but it trails Inception and The Karate Kid by a healthy margin.
As of 4 p.m. PT, Fandango.com is reporting that Super 8 is responsible for 8% of daily sales. That number should increase on Thursday.
Super 8 should manage $30.5 million over the weekend, and another $1.5 million from the special Thursday release. The location estimate is currently 3,200.

Even though First Class posted the lowest debut of any X-Men film with $55.1 million last weekend, it would be a stretch to call the reboot a failure. The buzz surrounding First Class is very strong and a healthy hold is likely. Nearly 42,000 Flixster users have combined to give the superhero flick an impressive 88% approval rating, and activity on Twitter remains strong. There's little doubt that First Class suffer from the kind of catastrophic decline that plagues many summer releases. Expect a sophomore haul of $27 million.

Judy Moody And The Not Bummer Summer will serve as a bit of couter-programming to Super 8 and X-Men: First Class—it will appeal predominantly to young girls, and it will make for a nice mother/daughter trip to the movies. Guys of all ages won't be caught dead at it, so cross-over appeal is basically non-existent.

Judy Moody has a weak presence on both Facebook and Twitter. The film's Facebook page added a mediocre 591 likes this week for a total of 9,000 and counting. On Twitter, Judy Moody is barely keeping up with the soft tweet counts of 2010's Ramona and Beezus.

Fandango is reporting that Judy Moody has yet to crack the top five sellers list.

Look for Judy Moody And The Not Bummer Summer to take in $6 million from 2,000 locations during its debut frame.