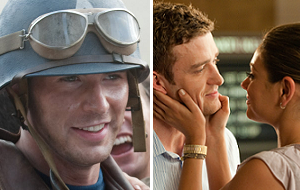 A patriotic superhero looks poised to topple a wildly popular wizard at the box office this weekend, while Justin Timberlake and Mila Kunis will try to grab adult moviegoers looking for something without fantasy/sci-fi elements.

Opening a week after Harry Potter and the Deathly Hallows: Part II won't be easy, and a rush of repeat viewings could seriously hinder Captain America's debut. Paramount has to be hoping that rabid Potter fans will get multiple viewings out of their system before Friday.

As of 4 p.m. PT, Fandango.com is reporting that Captain America is responsible for 11% of daily sales. That's not bad with the shadow of Potter still looming large.

Look for Captain America to rake in $55 million from around 3,500 locations during its debut frame.

Potter fans are obviously pleased with the final installment, but a steep drop is unavoidable after the film's record opening. Not surprisingly, Fandango is reporting that as of 4 p.m. PT the fantasy flick still leads daily sales with a whopping 64% of sales. $52 million—or a 69% drop—looks likely during Potter's sophomore frame.

Early on, many industry prognosticators were concerned that Friends With Benefits would look too familiar to audiences who were exposed to No Strings Attached just six months earlier. After all, the two films share the same basic premise: two twentysomethings agree to have sex without getting emotionally involved. Luckily, a rush of online activity spurred in large part by dates that Mila Kunis and Justin Timberlake have set up at a Marine Corps Ball has helped the comedy stand out.

Fandango is reporting that Friends With Benefits has yet to crack the top five sellers list. That could change on Thursday as more couples plan for the weekend.

Expect Friends With Benefits to take in $24 million from around 2,700 locations this coming weekend.