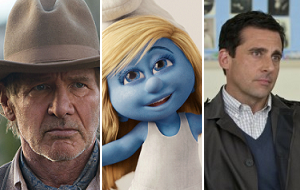 Three new wide releases will try to push Captain America: The First Avenger out of the #1 position at the box office this weekend, and Cowboys & Aliens is the heavy favorite to be the one that does it.

Combine the star power of Harrison Ford and Daniel Craig with the trust that Jon Favreau (Iron Man 1 & 2) has earned as a director and there's no way Cowboys & Aliens can't open strong, but sticking around after opening weekend is another thing. C & A will appeal mostly to males, and more specifically to fanboys. That type of audience tends to rush out opening weekend. This sci-fi/western hyrbid has "front-loaded" written all over it.

As of 4 p.m. PT, Fandango.com is reporting that Cowboys & Aliens is responsible for 5% of daily sales. That's not bad considering it has to compete with Harry Potter and the Deathly Hallows: Part II at 32% and Captain America at 19%.

Look for Cowboys & Aliens to open to $39 million from more than 3,700 locations.

Since Mr. Popper's Penguins, Zookeeper and Winnie The Pooh fell way short of dominating the box office, the market is ripe for a film aimed at families. Enter The Smurfs. The little blue creatures should have no problem raking in some lucrative family business.

Activity on Facebook and Twitter is very solid for The Smurfs when compared to Yogi Bear and Winnie The Pooh.

Fandango is reporting that The Smurfs hasn't cracked the top five sellers list. A surge in sales on Thursday is a strong possibility.

Expect The Smurfs to grab $25 million from more than 3,200 locations.

Adults who aren't excited superheroes, aliens and car chases need something to see during the summer, and that's where Crazy, Stupid, Love comes in. The dramedy should succeed where Larry Crowne failed when it comes to roping in adults with star power and mature themes.

C,S,L is outpacing other dramedies such as Love and Other Drugs and Something Borrowed on Facebook and Twitter.

Fandango is reporting that Crazy, Stupid, Love has yet to crack the top five sellers list. That's likely to change on Thursday as more couples plan for the weekend.

Crazy, Stupid, Love looks poised for a $17 million debut from more than 2,500 locations.