Weekend Predictions: ‘Rise of the Planet of the Apes’ and ‘The Change-Up’ 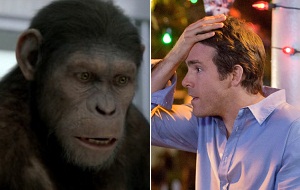 The cycle of changing number #1 films looks to continue this weekend with the release of Fox's Rise of the Planet of the Apes. Also entering the marketplace this weekend is Universal's The Change-Up.

With Rise of the Planet of the Apes, Fox is attempting to restart the long dormant science fiction franchise. The last installment of the franchise, the 2001 Planet of the Apes remake, opened with $68.53 million back in 2001. Given the lack of Tim Burton's presence and the rebooting of the franchise this time around, Rise of the Planet of the Apes will be very hard pressed to match that number, even with ten years of ticket price inflation. The unproven nature of star James Franco as a box office draw may also be a major hurdle in bringing in moviegoers outside of the film's pre-established fanbase this weekend. However, the film should still be able to get off to a respectable first place start this weekend thanks to the aid of its remaining fanbase and a late-hitting, but well received advertising campaign.

In the world of online activity, Rise of the Planet of the Apes is out-performing Battle: Los Angeles by a comfortable margin on Twitter, but on the other hand is running well behind Battle: Los Angeles on Facebook. In general, online activity for Rise of the Planet of the Apes has been good, but not great so far for a high-profile science fiction film. Subscribe to Boxoffice Pro for full Facebook and Twitter tracking.

As of 4 p.m. PT, Rise of the Planet of the Apes has yet to enter Fandango's top five sellers for the day. That is a bit troubling with regard to a potential break-out for the film, especially given that the similarly targeted Cowboys & Aliens was responsible for 5 percent of daily sales at the same point in time last week.

Look for Rise of the Planet of the Apes to debut with $39 million this weekend from an estimated 3,500 locations.

With The Change-Up, Universal looks to duplicate the success that so many R-rated comedies have experienced this summer, including the studio's own Bridesmaids. Co-stars Ryan Reynolds and Jason Bateman have both already had a presence at the box office this summer with their respective $100 million performers Green Lantern and Horrible Bosses. The timing of The Change-Up would seem to be perfect with Reynolds and Bateman having both already been in the recent spotlight. However, the possibility also exists that The Change-Up may be one R-rated comedy too many this summer, at least with regard to built-up opening weekend demand. Regardless of the level of its performance this weekend, The Change-Up will have a good chance of building strong word of mouth throughout the month of August.

After being sluggish on Twitter in the weeks leading up to its release, The Change-Up has really picked up the pace over the past few days. The film is performing stronger than Horrible Bosses on Twitter and on Facebook, but the comparison between the two is also skewed in the favor of The Change-Up as it should skew both younger and more towards female moviegoers than Horrible Bosses did.

As of 4 p.m. PT, The Change-Up has also failed to enter Fandango's top five sellers for the day. However, it has been commonplace throughout the summer for comedies to do well on opening weekend without strong pre-sales on Fandango.

Look for The Change-Up to open with $19 million from an estimated 2,700 locations. That will put the film in a close battle for second place with Sony's The Smurfs this weekend.

Speaking of The Smurfs, look for the family film to have a solid hold this weekend. The surprisingly strong performer is being well received by its target audience and won't face any new direct competition this weekend for both family and 3D business. At the same time, the initial rush-out of nostalgic fans of the television series last weekend should prevent the film from having an exceptional second weekend hold.

As of 4 p.m. PT, The Smurfs was responsible for 22 percent of daily sales on Fandango, which leads the day by a comfortable margin.

Universal's Cowboys & Aliens shouldn't hold up nearly as well as The Smurfs, thanks in part to the direct competition from Rise of the Planet of the Apes. Even without the added competition, Cowboys & Aliens would likely be quite front-loaded to begin with, though the film's older-skewing audience might limit the front-loading slightly. Expect the film to drop all the way down to fourth place this weekend.

Tags: The Change-Up, Rise of the Planet of the Apes