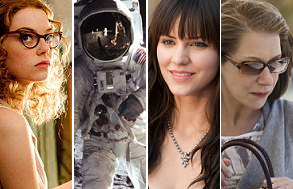 Wednesday Update: The Help should have no problem fending off three newcomers during the extended Labor Day frame.

There's simply no stopping The Help. Disney's drama is taking full advantage of a marketplace that is lite on films aimed at adults. The Help reached the $100 million plateau on Tuesday, and now $150 million seems like a very real possibility. As if The Help hadn't already become enough of a must-see, increased Oscar talk for co-stars Viola Davis and Octavia Spencer is helping fan that flame.

As of 4 p.m. PT, Fandango reports that The Help is responsible for a healthy 14% of daily sales—a lead it should have no problem maintaining all week.

Look for The Help to rake in another $16.5 million over four days.

Apollo 18 has emerged as this weekend's strongest newcomer. The Weinstein Company release will test whether or not audiences are enticed by the found footage approach in a sci-fi setting. The whole found footage genre is still going strong after the success of Paranormal Activity 2 and The Last Exorcism, so Apollo 18 should be able to rope in a healthy fraction of the audience that lined up for PA2 and Exorcism.

Fandango is reporting that Apollo 18 has yet to make a dent in online sales. That should change on Thursday as more cinematic thrill seekers begin to plan for the weekend.

Apollo 18 should manage $15 million from around 2,750 locations during its debut frame.

Shark Night 3D is gunning for the same camp-loving crowd that showed up for Piranha 3D last August. Unfortunately, there's a pretty low ceiling for horror flicks that don't take themselves too seriously. Look no further than Piranha 3D's mediocre $10.1 million debut/$25 million cume. Shark Night 3D will probably end up falling short when it comes to matching Piranha 3D.

Fandango reports that Shark Night has yet to make an impact.

Shark Night 3D looks poised to rake in $9.5 million from around 2,400 locations over four days.

Even though it has the advantage of opening on a Wednesday, The Debt is going to be a tough sell. A bleak revenge thriller won't exactly jump out at moviegoers who are looking to enjoy the last days of summer. The combined star power of Helen Mirren and Sam Worthington will help fill some seats, but this long-delayed release has "dud" written all over it.

Fandango reports that The Debt accounts for 11% of daily sales. That's an underwhelming figure for a new wide release.

Look for The Debt to manage $7 million from 1,786 locations over the four-day frame and $8.2 million over its first six days.