TIFF 2011: Straight Talk About The Political Pressures Of 'The Ides of March' 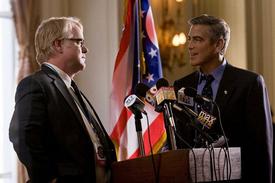 The Ides of March is a chess game where the king is a presidential candidate played by George Clooney. We're behind his campaign manager, an ideologically untainted bishop (Ryan Gosling)—that is, until he eventually reaches the end of the board and becomes the dangerous queen.

Grant Heslov, who co-wrote the film with Clooney, says they wanted less to write a political film and more to write "a morality tale in a political milieu." The idealists fall and the game continues. "Really, this story could have taken place in business or any number of professions," says Heslov. "It's really more about making the choices we make and how much of our soul you're willing to sell to win."

Two years ago, Heslov directed The Men Who Stare at Goats, a slightly political comedy about war—or to be more specific, the comedy about the side effects of war. In this film, he covers the intensive strategy of the political arena but these details fall away once the personal dramas begin. "We want to catch the audience off guard," says Heslov, adding he thinks "Democrats will like the first half and the Republicans will like the second."

Jeffrey Wright (the cold-hearted scientist in Source Code), who here plays a powerful Southern Democrat, has a different take. To him, Ides of March is a "gangster film," he insists. "These were guys are vying for a piece of the power pie and were willing to stab their morals in the heart to maintain their seat at the table." Couldn't that also mean it's about idealism gone wrong? Nope. Says Wright, "Corruption bleeds out into even the press that cover the politics. We're talking about shark-infested waters."

"There's a big rift between the desire to lead people and the desire to be out front. The real concerns of the constituency, not the pandering concerns, fall away and what is primary is the desire to be in power," he adds, describing his senator as "a shape-shifter. As a southerner he's had to appeal to different groups-to evangelicals and conservatives."

On set, director and star Clooney was a natural leader both in front of and behind the camera. But he was by no means stoic-around him, everyone had to watch their backs. "George had an Evian spray bottle that was silent and he'd talk to his cast and lean over their shoulders and spray their pants so they looked like they wet themselves," admits Heslov.

But after doing four films with Clooney—the other three are The Men Who Stare at Goats, Leatherheads and Good Night and Good Luck—Heslov says his collaboration with Clooney is like an old marriage. "If he's doing a scene and he looks at me and I [gives a disapproving glance], he'll do it again." That's how they monitor quality—and keep perspective. "Art has its place, but nobody's going to live or die based on our work. Tarring and roofing, that's work," says Heslov. "We're privileged to do what we do and in that context, you gotta have some fun and make it fun and not take it too seriously. So even if it's a deadly serious scene, if you can't laugh at it because 'What you're doing is so important,' how good can it be? Not to belittle this point, but it's a big world."