Weekend Predictions: 'Contagion,' 'Warrior' and 'Bucky Larson: Born To Be A Star' 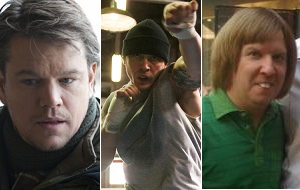 Contagion, the latest ensemble flick from Oscar-winner Steven Soderbergh, will have no problem claiming the top spot at the box office this coming weekend.

A deadly virus will finally end The Help's #1 reign after three weekends. Contagion has quite a bit going for it: a great high-concept premise, an all-star cast led by Matt Damon and some of the most atmospheric trailers of the year. The surprising success of The Debt last weekend proves once again that adults are hungry for entertainment aimed directly at them. The fact that Soderbergh's thriller is also in IMAX will only serve to bolster receipts. Contagion will help Warner Bros. start the fall season off on a high note.

As of 4 p.m. PT, Fandango is reporting that Contagion represents a modest 8% of daily sales. Business should pick up on Thursday.

Look for Contagion to manage $22 million from more than 3,100 locations during its debut frame.

Warrior may not open with a bang, but it has "sleeper hit" written all over it. The Lionsgate release will turn stars Joel Edgerton and Tom Hardy into much bigger stars—it just won't happen over the course of one weekend. Word of mouth needs to spread quickly for this one, and Lionsgate was wise to roll out a sneak preview last Sunday. Expect a modest debut followed by strong staying power in the weeks to come.

Fandango reports that Warrior has yet to crack the top five sellers list, but that's bound to change on Thursday.

Warrior should grab $9 million from around 1,700 locations.

While Warrior shows lots of promise, Bucky Larson: Born To Be A Star shows almost none. Star Nick Swardson is recognizable thanks to supporting turns in the likes of Just Go With It and 30 Minutes or Less, but he's far from a reliable draw. This comedy will die a quick death at the box office.

Bucky Larson has no pulse on Fandango, and that's not likely to change on Thursday.

A gross of $3 million from around 1,400 locations looks likely for Bucky Larson.

Tags: Contagion, Warrior, Bucky Larson: Born To Be A Star