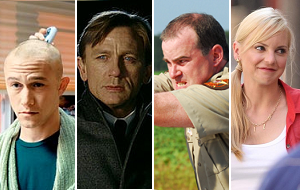 Four newcomers won't be a match for what's shaping up to be a strong sophomore frame for Dolphin Tale.

After a summer full of disappointments, families are clearly hungry for a reason to go to the movies. Dolphin Tale has happily filled that need. Word of mouth is very strong for the inspirational drama. For proof, look no further than the solid 82% approval rating from more than 9,000 Flixster users. The Warner Bros. release is going to hold up very well in the weeks to come.

As of 4 p.m. PT, Fandango reports that Dolphin Tale is responsible for 11% of daily sales.

Dolphin Tale should rake in $13.7 million during its second weekend in theaters.

50/50 has emerged as the strongest newcomer. Star Joseph Gordon-Levitt is on his way up, and supporting player Seth Rogen comes with a solid following. Unfortunately, two big factors are working against the film: 1) a lot of people don't find cancer to be funny and 2) the audience will likely be made up mostly of twentysomethings, which will limit its potential. Expect a modest start that could be supplemented in the weeks to come by positive word of mouth.

Fandango reports that 50/50 has yet to crack the top five sellers list. That should change on Thursday as more moviegoers plan for the weekend.

Dream House finds Daniel Craig making a play at the thriller genre. Will moviegoers who've grown accustomed to watching the surly actor play James Bond buy him outside of that legendary franchise? Not quite. Right now, it looks like Craig's Bond fame won't turn Dream House into a hit. The thriller is posting only mediocre tweet counts—not a good sign for a film in a genre that usually inspires plenty of tweets.

According to Fandango, Dream House has yet to make a dent in online sales.

Courageous is aiming for the same faith-based audiences that came out to support Fireproof and Soul Surfer. A minimal ad campaign means that this drama will need to rely most on word of mouth. Expectations for the opening weekend are modest, but it could explode from there.

Fandango reports strong sales for Courageous. The drama's daily total as of 4 p.m. is 20%, which consists largely of church groups snatching up tickets in bulk.

Expect Courageous to rake in $8.5 million from around 1,100 locations during its debut frame.

What's Your Number? has "dud" written all over it. Anna Faris is far from a reliable draw, and Chris Evans has better luck playing a superhero than anything else. Moviegoers looking for a date night option may flock to this romantic comedy, but that won't be enough to save it from fading quickly into obscurity.

What's Your Number? has little presence on Fandango as of 4 p.m. PT.

Look for What's Your Number? to end up with a mediocre $7 million from around 3,000 locations.