Long Range Forecast: 'Mission: Impossible - Ghost Protocol,' 'The Adventures of Tintin: The Secret of the Unicorn,' 'The Girl with the Dragon Tattoo,' 'We Bought a Zoo,' 'War Horse' and 'The Darkest Hour' 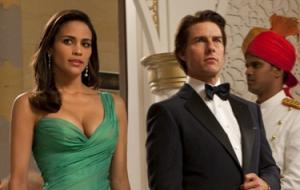 We've added six new films to the Long Range Forecast this week. Mission: Impossible - Ghost Protocol, The Adventures of Tintin: The Secret of the Unicorn and The Girl with the Dragon Tattoo all open on December 21. We Bought A Zoo opens on December 23, and War Horse and The Darkest Hour are being held until Christmas Day.

Ghost Protocol looks as though it will emerge as the most successful among this wave of additions. Even with Tom Cruise's staring power at diminished capacity, the franchise is still a solid earner. It also helps that the trailers have gone over quite well on Facebook and Twitter.

The end of the year is going to be a very busy time for Steven Spielberg. He directed both Tintin and War Horse. We're betting that Tintin will make more money, but if War Horse becomes a serious Oscar heavyweight the way that most pundits are predicting then the gap could end up being a lot smaller.

If anyone can bring The Girl with the Dragon Tattoo more mainstream acceptance it's David Fincher. The Oscar-nominated director pulled off a small miracle by making The Social Network into a near-$100 million domestic hit. Sony is putting a lot of marketing muscle behind Dragon Tattoo, so they must be confident.

We Bought a Zoo should be a sizable hit thanks to the support of families. It has everything: a tear-jerker plot, animals and cute, young kids. The main drawback is that Matt Damon isn't exactly a sure-thing at the box office. He's had more than his share of duds recently.

The Darkest Hour will have to fight for the scraps that fall off the table while other juggernaut releases are eating. It won't be pretty.

*opens on a Sunday

Tags: Mission: Impossble - Ghost Protocol, The Adventures of Tintin: The Secret of the Unicorn, The Girl with the Dragon Tattoo, We Bought a Zoo, War Horse, The Darkest Hour