Weekend Predictions: 'Footloose,' 'The Thing' and 'The Big Year' 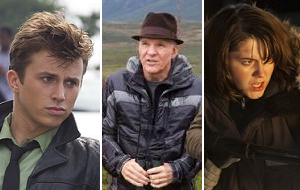 A remake about dancing revolutionizing a small town is poised to fend off two other newcomers: a prequel to an '80's horror film and a comedy about bird watching.

With the help of a young, on-the-rise cast, Footloose should have no problem grabbing the attention of the fickle teenagers. Fans of the original may end up coming out mostly out of curiosity, but they won't represent a dominant portion of the opening weekend audience.

As of 4 p.m. PT, Fandango is reporting that Footloose accounts for a respectable 5% of daily sales. It is being overshadowed by The Twilight Saga: Breaking Dawn Part I's dominant 28%.

Look for Footloose to manage $18 million from 3,300 locations during its debut frame.

The Thing is fighting an uphill battle, because it's highly likely that horror junkies are saving their money for Paranormal Activity 3 next weekend. With that said, die-hard fans of John Carpenter's 1982 flick of the same name will surely turn up on opening weekend. The Thing could also appeal to viewers who are already sick of the found-footage genre and therefore have no interest in PA3.

Fandango reports that The Thing has yet to crack the top five sellers list—never a good sign.

The Thing looks poised for $8.5 million from more than 2,900 locations.

The Big Year boasts a strong comedic triumvirate: Steve Martin, Owen Wilson and Jack Black. Unfortunately, there are a lot of recent duds among those three. Martin had The Pink Panther 2, Wilson had Hall Pass and Black had Gulliver's Travels. The Big Year doesn't look like it will fall in the success column for any of the actors. The weak marketing blitz has "dump" written all over it.

Fandango reports that The Big Year has yet to crack the top five sellers list.