Weekend Predictions: 'Puss In Boots,' 'In Time,' 'The Rum Diary' and 'Anonymous' 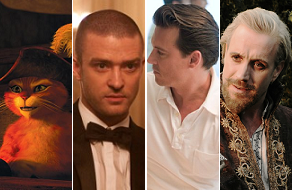 A smooth-talking cat will have no problem fending off three other newcomers and a horror holdover at the box office this coming weekend.

DreamWorks Animation is understandably trying to prolong the life of its Shrek property by offering up a spin-off film focusing on Puss In Boots, the swashbuckling cat voiced with typical gusto by Antonio Banderas. Puss is wildly popular, so there's little doubt that plenty of tickets and action figures will be sold with this entry. Families are clearly starving for content—how else do you explain the complete dominance of The Lion King, a 17-year-old film?—and Puss In Boots will satisfy that need.

As of 4 p.m. PT, Fandango reports that Puss In Boots accounts for a modest 4% of daily sales. The Twilight Saga: Breaking Dawn - Part I leads with 38%, while Paranormal Activity 3 is in 2nd with 9%.

Look for Puss In Boots to rope in $42 million from more than 3,800 locations during its debut frame.

In Time star Justin Timberlake is trying very hard to become a viable draw, but only the paying public can decide whether that's going to happen. Timberlake's last outing was Friends With Benefits, a romantic comedy that grabbed $18.6 million during its debut frame. FWB was aimed right at Timberlake's female fans, but In Time is bound to skew male. If Timberlake's female base doesn't come out that could mean trouble. Expectations are relatively modest.

Fandango reports that In Time has yet to make a dent in daily sales. That could change tomorrow as more couples plan for the weekend.

The Rum Diary will only go so far on the star power of Johnny Depp and the passionate following that Hunter S. Thompson commands posthumously. There's simply too much competition in the market for this R-rated, adult-skewing flick to make much of an impact. Rum Diary should amass a healthy cult following.

Anonymous is essentially being dumped by Sony. Director Roland Emmerich's costume drama looked like it was assured of a wide release until just recently. A strong showing in limited release could inspire Sony to give it more locations, but don't expect anything that massive. Emmerich (2012, Godzilla) will return to destroying the planet soon enough.

Anonymous should manage $1.6 million from around 200 locations.