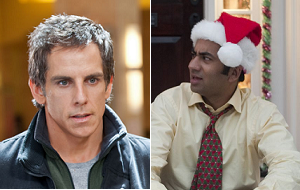 Two new comedies will try to edge Puss In Boots out of the top spot at the box office this coming weekend.

Tower Heist is the clear favorite to win the weekend. The combined star power of Ben Stiller and Eddie Murphy will earn tons of mainstream trust. Add to that an accessible high-concept premise, and its quite clear that Universal has a winner on their hands.

As of 4 p.m. PT, Fandango reports that Tower Heist has yet to crack the top five sellers list. That's not a surprise considering that The Twilight Saga: Breaking Dawn - Part 1 boasts a dominant 64%.

Look for Tower Heist to grab $29 million from more than 3,200 locations during its debut frame.

A Very Harold & Kumar Christmas 3D should have no problem topping the $14.9 million debut of Harold & Kumar Escape from Guantanamo Bay. The addition of 3D will help alleviate any audience drop-off that may occur. Expectations are still modest considering that these films really flourish on home-viewing platforms.

Fandango reports that H&K has yet to crack their top five sellers list.