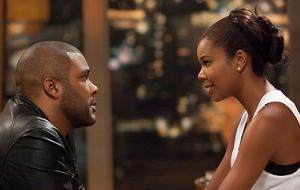 We've added Good Deeds, Wanderlust, Gone and Act of Valor to the Long Range Forecast this week. All four films are set to open on February 24.

Tyler Perry has a very loyal fanbase, but his most successful films tend to be the ones that feature his beloved Madea character. Good Deeds does not, and expectations are slightly cautious as a result.

Paul Rudd and Jennifer Aniston re-team for Wanderlust, a new comedy from David Wain (Role Models). Wanderlust will try to reverse the trend of films that grapple with job loss bombing at the box office by presenting a comedic take.

Amanda Seyfried will try to carry a film on her own with Gone, a thriller that should do well among females but will have a tough time crossing over to males.

Act of Valor is exactly the kind of action flick that can turn into a surprise hit early in the year. Keep an eye on this one.