Weekend Predictions: 'Mission: Impossible - Ghost Protocol,' 'The Girl with the Dragon Tattoo,' 'We Bought a Zoo,' 'The Adventures of Tintin,' 'War Horse,' and 'The Darkest Hour' 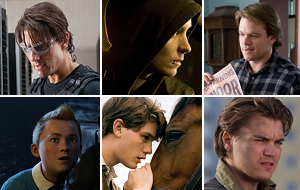 Mission: Impossible - Ghost Protocol is the heavy favorite to emerge victorious during what's shaping up to be an unusually crowded end of the year.

Ghost Protocol is surging forward with great word of mouth thanks to IMAX showings that began across the country last Thursday. A 90% approval rating from more than 38,000 Flixster users bodes very well for the action flick. It seems even moviegoers who were put off by Tom Cruise's recent PR disasters are turning up for Ghost Protocol.

As of 4 p.m. PT, Fandango reports that Ghost Protocol is responsible for 25% of daily sales.

Look for Mission: Impossible - Ghost Protocol to bring in $26.5 million from around 3,400 locations this coming weekend.

Director David Fincher's version of The Girl with the Dragon Tattoo is poised to join the ranks of The Silence of the Lambs, Hannibal and Se7en as a about a serial killer investigation that breaks through with mainstream audiences—not an easy task. The source novel has millions of loyal fans, and Fincher brings plenty of followers of his own. Dragon Tattoo could easily turn into a breakout hit.

Fandango reports that Dragon Tattoo accounts for 24% of daily sales.

Expect The Girl with the Dragon Tattoo to rake in $20 million from 2,800 locations over the weekend.

We Bought a Zoo is a viable option for the entire family, and it should do quite well as a result. 20th Century Fox wisely rolled the dramedy out early for two rounds of sneak previews—a move that surely gives it a much-needed advantage over the competition. The presence of Matt Damon and Scarlett Johansson will make Zoo more inviting for parents. We're not dealing with Zookeeper here.

We Bought a Zoo looks poised to grab $12.5 million during its debut frame.

The Adventures of Tintin will have to compete directly with We Bought a Zoo for the attention of families. Fans of the source material are guaranteed to show up, but after that it may take word of mouth to bring in a wider audience. Tintin is far from a sure thing despite carrying the pedigree of being a Steven Spielberg film.

The Adventures of Tintin should open to $11 million from around 3,000 locations.

Because they open on Sunday, War Horse and The Darkest Hour won't have a traditional opening weekend. War Horse is the kind of prestige pic that makes a killing during this time of the year. The Darkest Hour, on the other hand, will have to settle for leftovers. The sci-fi flick feels as though its being dumped by hitting theaters in the midst of such strong competition.

War Horse is pegged for around 2,300 locations, and The Darkest Hour has around 2,200 dates in waiting.

Check out the rest of our predictions for this coming weekend in the table below.

Tags: Mission: Impossible - Ghost Protocol, The Girl with the Dragon Tattoo, We Bought a Zoo, The Adventures of Tin, The Darkest Hour, War Horse