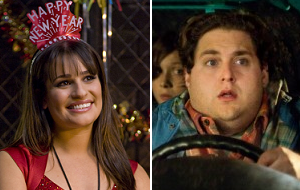 A star-studded ensemble will surely help push New Year's Eve to a #1 debut at the box office this coming weekend.

Director Garry Marshall is capitalizing on a fool-proof formula late in his career: gather tons of stars, pick a holiday, shake up and serve. In 2009, Marshall's Valentine's Day took in a staggering $110.5 million. It'll be tough for New Year's Day to match VDay's haul with all the competition it has to face at this time of the year, but that doesn't mean it won't be successful in its own way.

As of 4 p.m. PT, Fandango reports that New Year's Eve is responsible for a solid 10% of daily sales.

Look for New Year's Eve to rope in a healthy $22.5 million from around 3,300 locations during its debut frame.

The Sitter already seems a bit dated for two reasons: 1) Jonah Hill has lost a lot of weight since it was filmed and 2) Hill is moving in a different direction in his career. Moneyball showed that Hill could hold his own in a drama, and 21 Jump Street will try to turn him into something of an action star. If it wasn't so coarse, The Sitter could rope in family audiences. As it stands, the R-rated comedy will have to settle for the same lackluster crowds that showed up for the likes of 30 Minutes or Less, Scott Pilgrim vs. the World and Your Highness.

Fandango reports that The Sitter has yet to crack the top five sellers list.

The Sitter looks poised to take in $13 million from around 2,500 locations during its opening weekend.