Weekend Predictions: 'Contraband,' 'Beauty and the Beast,' 'Joyful Noise' and 'The Iron Lady' 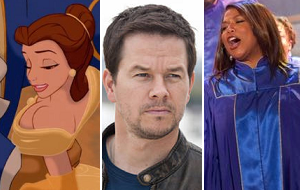 Contraband will serve as the perfect bit of counter-programming to all the weighty Oscar flicks that dominate theaters this time of year. Mark Wahlberg's drawing power is in good shape after the triumph of The Fighter in 2010. This one can't miss.

As of 4 p.m. PT, Fandango reports that Contraband accounts for 6% of daily sales.

Contraband looks poised for a $21.5 million debut from 2,750 locations over four days.

Disney hopes to repeat the success of The Lion King 3D with Beauty and the Beast 3D. Unfortunately, B&B 3D trails King on Facebook and Twitter. The disconnect in online enthusiasm does not bode well.

With an ethnically diverse cast on its side, Joyful Noise could turn into a breakout hit. Queen Latifah brings along a loyal audience.

The Iron Lady will be pushed along by Oscar buzz surrounding Meryl Streep's lead performance. Streep has earned an almost-unmatched level of mainstream trust over the years. $5 million this coming weekly is likely thanks to an expansion to 700+ locations.

Check out the rest of our 4-day predictions in the table below.