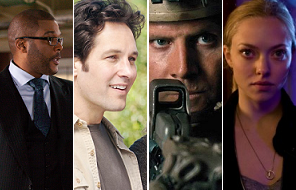 Even without Madea by his side, Tyler Perry should have no problem claiming the top spot at the box office once again this weekend.

Good Deeds marks Tyler Perry's entry into the rich-guy-learns-life-lessons genre. The Lionsgate release gives off a serious, dramatic vibe that is closer to For Colored Girls and The Family That Preys than any of the films featuring the beloved Madea character. The reality is that Perry is more successful at the box office when he includes Madea. The multi-hyphenate's best opening is still the $41 million haul that 2009's Madea Goes to Jail raked in. There's no way Good Deeds will top that, but it could turn into a solid hit if moviegoers outside of Perry's loyal base embrace it.

As of 4 p.m. PT, Fandango reports that Good Deeds accounts for 2% of daily sales in the shadow of The Hunger Games, which boasts a staggering 80%.

Look for Good Deeds to grab $19 million from around 2,000 locations.

Backed by an aggressive marketing campaign, Act of Valor is poised to do surprisingly well for a film without any blockbuster stars. The idea that the Relativity Media release stars real Navy SEALs seems to be enticing to a large population of moviegoers. Keep a close eye on this one—it could even top Good Deeds.

Fandango reports that Act of Valor is responsible for 3% of daily sales.

Act of Valor should managed $17 million from around 3,000 locations during its debut frame.

Wanderlust marks a Paul Rudd/Jennifer Aniston reunion nearly 14 years after The Object of My Affection turned into a sleeper hit that boosted both of their careers. Thanks to the likes of Role Models and I Love You, Man, Rudd has established himself as a viable draw. Aniston, on the other hand, is hit and miss—but mostly miss. Expectations are relatively modest, but Wanderlust should serve as a viable date-night option now that The Vow will begin to slow down.

Fandango reports that Wanderlust has yet to crack the top five sellers list.

Expect Wanderlust to take in $10.5 million from around 1,900 locations during its debut frame.

Gone represents a huge test for star Amanda Seyfried. Red Riding Hood, her last leading role, opened to a relatively weak $14 million. With a crowded marketplace to compete with, Gone probably won't even reach half of that opening. That's not the direction Seyfried should be heading in—Gone will surely represent a major step back in her career.

Fandango reports that Gone has yet to crack the top five sellers list.

Gone looks poised for a $6 million debut from around 2,000 locations.