Weekend Predictions: 'The Vow,' 'Ghost Rider: Spirit of Vengeance,' 'This Means War' and 'The Secret World of Arrietty' 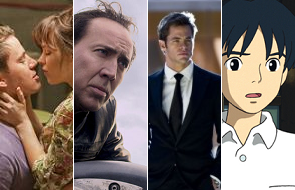 The Vow should be able to fend off three newcomers during the extended Presidents' Day Weekend.

The pairing of Channing Tatum and Rachel McAdams has resulted in a financial juggernaut. By grossing $11.6 million on Tuesday, The Vow shattered the mid-week Valentine's Day record set by Hitch with $7.5 million. Unlike other Valentine's Day releases, the romantic drama looks like it will have staying power after the holiday has passed.

As of 4 p.m. PT, Fandango reports that The Vow leads with 24% of daily sales.

Look for The Vow to take in $31 million over four days.

Ghost Rider: Spirit of Vengeance star Nicolas Cage has endured his share of duds, but the original Ghost Rider certainly wasn't one of them. 2007's Ghost Rider grabbed $45 million during its debut frame on its way to a $115.8 million domestic cume. A five year break in between films means that there'll be some inevitable drop off, but Spirit of Vengeance is still poised to do well.

Fandango reports that Spirit of Vengeance has yet to crack the top five sellers list—not a good sign.

Ghost Rider: Spirit of Vengeance looks like it will manage $30 million from around 3,000 locations.

This Means War has star power to spare, but it will be competing with The Vow for the attention of date-night moviegoers. The McG-directed flick comes on the heels of some high-profile romcom/action duds such as Knight and Day and Killers, so it's possible that audiences will reject yet another.

Fandango reports that This Means War accounts for 3% of daily sales.

This Means War looks poised to take in $18 million from around 3,100 locations.

Disney's The Secret World of Arrietty will find a niche among animation enthusiasts, but it won't come even remotely close to posting typical Disney numbers. Expectations are modest.

The Secret World of Arrietty should rope in $5.5 million from 1,300 locations during its debut frame.

Tags: The Vow, Ghost Rider: Spirit of Vengeance, This Means War, The Secret World of Arrietty