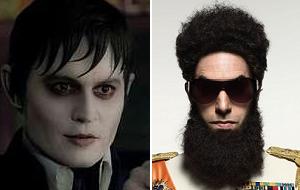 We've added WB's Dark Shadows and Paramount's The Dictator to our Long Range Forecast this weekend. Both films are scheduled to open on May 11.

- Tim Burton and Johnny Depp have a great track record together. 2010's Alice in Wonderland turned into a billion-dollar hit for Disney. Reaching even half of that would be a huge victory for Dark Shadows.
- Few actors are as big as Johnny Depp right now—his drawing power is immense.
- Warner Bros. will put a lot of marketing muscle behind their first summer tentpole

- Dark Shadows doesn't look nearly as commercially accessible as Alice in Wonderland. It might have a tough time reaching families.
- Adaptations of old television shows have a tendency to bomb. The Avengers, anyone? How about My Favorite Martian?
- The Twilight Saga has both started and put a damper on the recent vampire craze. Will audiences really want to see Johnny Depp as a vampire?

- Has the advantage of being the first male-skewing comedy of the summer.
- Star Sacha Baron Cohen is a pro at generating publicity.
- Great exposure during the Super Bowl and the Oscars helped raise awareness in a big way.

- Bruno left a bad taste in the mouth of many a viewer. People may not be so quick to forgive.
- Twitter awareness is not where it should be at this point in the release cycle.
- Cohen's schtick may have run its course. Maybe he should stick to juicy supporting turns like the one he had in Hugo. Also: What's up with the planned Freddie Mercury biopic?