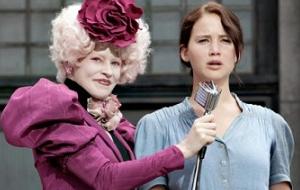 Lionsgate's The Hunger Games is poised to make March feel more like July at the box office this coming weekend.

The exhibition side of the industry has been bugging distributors to release tentpoles throughout the year—not just during the summer and the holiday season—and now distributors are finally listening. The Hunger Games would have no problem competing with the likes of The Dark Knight Rises and The Amazing Spider-Man this summer, but Lionsgate is wisely avoiding any unnecessary battles by releasing its prized property now. It's a smart move that is going to pay off in a major way.

Based on strong Facebook and Twitter activity, it's clear that The Hunger Games is not only connecting with the millions who have read the books but also with casual moviegoers looking for blockbuster entertainment. Early on, The Hunger Games was being labeled as "the next Twilight." Forget it. The "next Harry Potter" is beginning to make more sense. The first Twilight film opened to $69.6 million or $76 million when adjusting for inflation, while the first Harry Potter debuted to $90.3 million or $125.1 million adjusted. All signs indicate that The Hunger Games will end up closer to Potter than Twilight this weekend.

Early sales on Fandango are phenomenal. The ticketing site reports that The Hunger Games is now in fifth place on the list of advanced sellers, right behind The Twilight Saga: Eclipse. More tickets have been sold on Fandango for The Hunger Games than the first Twilight film sold during its entire theatrical run. 2,000+ shows of the sci-fi flick are already sold out.

Look for The Hunger Games to grab $125 million from more than 4,000 locations during its debut frame. That will be enough to top the March opening-weekend record of $116 million set by Alice in Wonderland in 2010.