Weekend Predictions: ‘The Five-Year Engagement,’ ‘The Raven,’ ‘The Pirates!,’ and ‘Safe’ 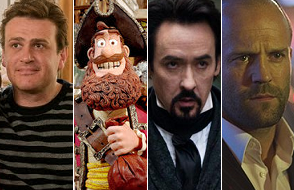 One week before the start of the summer movie season, four wide releases enter the marketplace this weekend. Universal's The Five-Year Engagement should have no problem leading the four newcomers, while the other three: Relativity's The Raven, Sony's The Pirates! Band of Misfits and Lionsgate's Safe don't look to make much noise at the box office.

Wedding themed films often make their way to theatres in either April or May, with this year's offering being The Five-Year Engagement. The Judd Apatow produced comedy starring Jason Segel and Emily Blunt hopes to duplicate the success Apatow and Universal experienced last year with Bridesmaids. Capturing lighting in a bottle the way Bridesmaids did will be a tough task for The Five-Year Engagement to duplicate in the weeks ahead, but the film appears poised to get off to a solid start in its own right this weekend. Previous opening weekend performances for Segel have included $17.8 million for 2009's I Love You, Man and $17.7 million for 2008's Forgetting Sarah Marshall. The Five-Year Engagement will look to top the opening weekend performances of both films.

As of 4 p.m. PT, The Five-Year Engagement has yet to appear on Fandango's top five sellers list. Marvel's The Avengers currently leads all films on Fandango with 35 percent of sales.

Look for The Five-Year Engagement to open in first place this weekend with $22.0 million from an estimated 2,800 locations.

The prospects for the weekend's other three wide releases don't look anywhere near as promising. All three films will likely find themselves behind second weekend holdovers Think Like a Man and The Lucky One as well as The Hunger Games (which will be returning to IMAX locations for one week beginning on Friday). While it is likely to have the lowest location count of the three, The Raven still looks to be the most promising of the trio this weekend.  The James McTeigue directed thriller stars John Cusack as Edgar Allan Poe. Cusack has had success in the past with thrillers such as 2007's 1408 and 2003's Identity, but quite a bit of time has obviously passed since then. The Raven also didn't make much box office noise last month when it was released in the United Kingdom.

While The Raven has actually been holding its own against The Five-Year Engagement on Twitter so far this week, it has also been generating underwhelming Twitter activity when it comes to thrillers and horror films.

As of 4 p.m. PT, The Raven has yet to enter today's top five sellers list on Fandango.

Expect The Raven to debut with $11.0 million from over 2,000 locations. That would only be good enough for fifth place among all films this weekend.

Aardman Animations unleashes The Pirates! Band of Misfits in the domestic market this weekend. The 3D stop-motion animated film has grossed $56.0 million internationally thus far, but in the past all prior films from Aardman Animations have performed stronger internationally than they have domestically. The Pirates! is obviously being aimed at family audiences, but families are likely to stay home this weekend as they await Marvel's The Avengers next weekend. Odds are strong that The Pirates! won't be able live up to the box office standards of previous Aardman Animation releases, which have all generated opening weekends in the range of $12 million to $19 million.

When it comes to Twitter, The Pirates! Band of Misfits has simply been dead this week, as it is posting some of the lowest raw Twitter numbers of any wide release during the past 2 ½ years. It should be noted that the film's title makes it a bit tricky to track on Twitter, but nonetheless the extremely low level of activity is a big red flag for the film's prospects this weekend.

As of 4 p.m. PT, The Pirates! Band of Misfits has yet to enter today's top five sellers list on Fandango.  Look for the film to debut in sixth place with $10.0 million from an estimated 3,000 locations.

Jason Statham returns to theatres this weekend in Safe. Statham has typically been able to open action vehicles in the neighborhood of $10 million over the past decade. Safe may not be able to reach those heights this weekend as action fans eagerly anticipate The Avengers, but it shouldn't be too far away from that mark either.

As of 4 p.m. PT, Safe hasn't entered Fandango's daily top film sellers list either. Expect the film to open in seventh with $8.0 million from an estimated 2,200 locations.

As mentioned, Sony's Think Like a Man, Warner's The Lucky One and Lionsgate's The Hunger Games all look to remain box office factors this weekend. Think Like a Man should find itself in a strong second place (and within shouting distance of The Five-Year Engagement), while The Hunger Games and The Lucky One appear set to battle it out over third place.

Check out the rest of our weekend predictions in the table below.

Tags: The Hunger Games, The Lucky One, Think Like a Man, Safe, The Pirates! Band of Misfits, The Raven