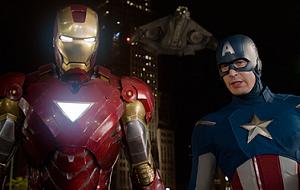 If Marvel's The Avengers lives up to its full potential, it could break the $169.2 million opening weekend record set by Harry Potter and the Deathly Hallows - Part II last July.

Anticipation for The Avengers has been building since Iron Man opened to a whopping $98.7 million in May 2008. Marvel has wisely built up a strong foundation—the only weak part being two failed attempts to nail down the Hulk character—that will provide a healthy base of fans for The Avengers. Disney orchestrated a pitch-perfect marketing campaign to build hype. Look no further than the current $260.5 million+ international haul for proof that the pieces of the puzzle are coming together.

Fandango reports that Avengers is currently outpacing Transformers: Dark of the Moon at the same point in the release cycle.

Look for Marvel's The Avengers to take in $170 million from more than 4,000 locations during its debut frame.