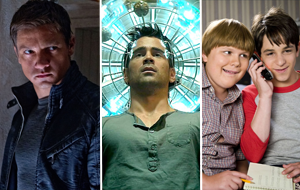 - The franchise name should still attract attention, even if falsely misleading people into thinking Matt Damon will show up at some point.
- Jeremy Renner has gained considerable awareness through his turns in The Hurt Locker, Marvel's The Avengers, and especially Mission: Impossible - Ghost Protocol.  He has a solid appeal with women as well, which won't hurt.
- Not having Damon might not necessarily prevent it from having a decently sized audience either, especially since Damon isn't always a sure-fire hit on his own.  The James Bond franchise has successfully replaced its lead actor many times before.
- The relative lack of non-comic book action films this summer could help this out.
- The Bourne Identity opened to $27.1 million ten years ago, and while the fanbase has since grown by leaps and bounds, this could be more backloaded as many fans might be apprehensive of the new direction.

- The James Bond franchise replaced its lead actors, but never its lead character.
- Damon's absence could put off some audiences.  Its the one role where he's been a bona fide draw on a large scale.
- Opening two weeks after The Dark Knight Rises means expectations of an action film should be considerably high.
- If Total Recall keeps its release date, opening against one another will eat into the audience.
- Both X-Men: First Class and the fourth Pirates of the Caribbean dropped over 40% in opening weekend ticket sales from their predecessors. First Class also dropped more than 56% in opening weekend ticket sales, and 49% in total tickets, from X-Men: The Last Stand.
- Opening two weeks before The Expendables 2 could lead to it being more front-loaded than either The Bourne Supremacy or The Bourne Ultimatum.

- This could pick up the slack after opening weekend among any audiences disappointed by The Bourne Legacy and/or that film's absence of Damon.  Quality has to be there for Recall too, though.
- Its likely to get a huge marketing push once The Dark Knight Rises is out.  Not that that always helps, of course.
- One has to think at least some fans of the original film will want to see this.  The question is: will anybody else?

- Arnold-less sequels and remakes don't usually fare too well (see Terminator Salvation and Conan the Barbarian).
- Colin Farrell isn't exactly a reliable box office draw.
- The last time action flicks tried to open in August after a Chris Nolan-directed Batman movie dominated the late summer market in 2008, we got the performances of Babylon A.D. ($22.5 million) and another remake in Death Race ($36.3 million).
- Opening against The Bourne Legacy and in between The Dark Knight Rises and The Expendables 2 makes for extremely tough direct competition.  With a large budget on the line, this is probably one of the remaining contenders for a last minute release date change before August rolls around.
- Trailer buzz has been relatively sparse.

- The second film in the franchise retained a respectable portion of the first film's audience, even increasing slightly in its opening weekend.
- No other family films opening the following weekend could help slightly, especially since the second film (Rodrick Rules) had to deal with Hop in its second frame last spring.

- Families may be looking for something new by this time, but this might not be their first choice of the month.
- With three films in two-and-a-half years, the franchise may be hard-pressed to build up its audience at this point.

The only notable change on our forecast this week is a revision on That's My Boy.